Emporia makes mobile phones for older people. At its Web site it says ‘Emporia is the worldwide technology leader for 50+ mobile phones’. The quote is taken from here. Well, OK, that’s a definition then. Older people are over 50, and Emporia makes phones designed for them.

I have a problem with this. I know lots of tech-savvy over 50s who feel rather patronised by the idea of a phone designed with the fact that they aren’t tech savvy in mind. And I know quite a few under 50s, under 40s actually, who hanker for easy to use mobiles. I’ve ranted about this before.

If Emporia labeled itself as a maker of handsets for anyone who wants easy to use hardware and uncomplicated software, for those who have physical difficulty using more widespread types of phone, and so on, then I’d not have to take them to task.

Anyway, Emporia launched a couple of new handsets at Mobile World Congress in February, and I’ve been looking one of them over. Called ELEGANCE it is designed to be stylish and easy to use. It is pictured on the left below. The other handset in the picture is the SOLID, a more rugged offering. 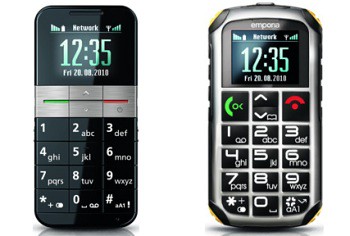 Compared with the last Emporia handset I looked at, theTALKpremium, the ELEGANCE is positively stylish. Smooth lines make it the kind of kit anyone might be pleased to carry.

The large buttons with their huge markings are friendly to those who have difficult reading anything too small, as well as probably being good for those whose grip isn’t that strong. I also like that the handset incorporates a torch. You just hold a side button down to activate it. The torchlight is on the upper edge of the casing and it is potentially very handy. Every phone should double up as a torch in my view.

The range of features is limited – telephony, SMS, Bluetooth, alarm. The latter is turned on and off with a side button, and more side buttons give you access to the handset’s main menus, with large buttons under the screen getting you through submenus.

The screen is pretty small, but it uses very large fonts to display information. The upshot is that not much text is visible at once, but that those with dodgy eyesight stand a better chance of reading it. One of the points many older people make about mobiles is that the text on screen can by way, way too small.

Overall, the ELEGANCE is the best Emporia handset I’ve seen. I am not convinced that those totally new to mobiles will grasp the combination of side button and under screen button controls easily at first, and I was not sent any of the documentation that ships with the handset so I don’t know how well that explains what’s what.

But one thing is clear. At last a maker of handsets for non mainstream groups seem to have grasped the nettle and done something which looks good and works well. Definitely a step in the right direction.