New Yorkers have been talking/protesting a lot about proposed natural gas drilling upstate, where much of our esteemed, tasty tap water originates. The issue: whether the industrial process of hydraulic fracturing, or fracking, is a threat to the watershed. 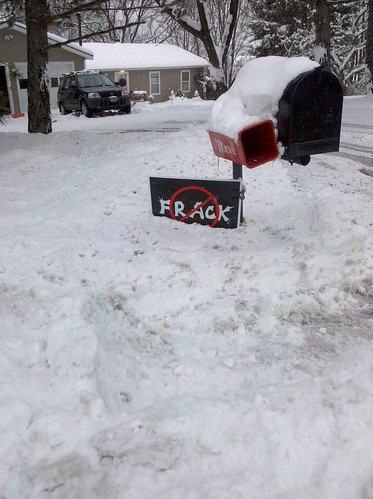 But as the United States becomes "the Saudi Arabia of natural gas" ( see Joe McKendrick's report ), this debate is happening all over the country.

The Environmental Protection Agency announced yesterday it will re-investigate hydraulic fracturing, in which water, sand, and unidentified chemicals are shot into natural gas wells at high pressure. The procedure opens up gas reserves locked underground by various geological formations.

"The use of hydraulic fracturing has significantly increased well beyond the scope of the 2004 study," EPA spokeswoman Enesta Jones wrote in response to questions from ProPublica. The old study, she said, did not address drilling in shale, which is common today. It also didn't take into account the relatively new practice of drilling and hydraulically fracturing horizontally for up to a mile underground, which requires about five times more chemical-laden fluids than vertical drilling.

What is in the fracturing liquid differs according to location and company. (Halliburton and BJ Services have used diesel fuel in their fracturing techniques.) These liquid recipes are also considered trade secrets.

If passed, the FRAC Act (Fracturing Responsibility and Awareness of Chemicals), introduced to Congress last summer, will make disclosing the ingredients of these fracking fluids mandatory.

The EPA Science Advisory Board will meet in early April to advise on how to proceed. Last month, the House Energy and Commerce Committee began its own investigation.

Join Discussion for: EPA digs deeper into fracking for natural...