The BT-30C comes at a price point that may entice enterprises to dabble more with augmented and mixed reality apps.
Written by Larry Dignan on May 8, 2019 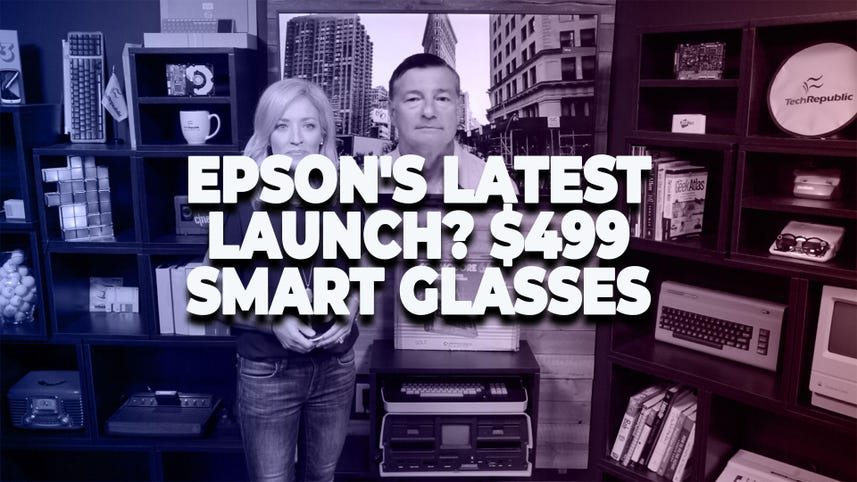 Epson is launching a new version of its Moverio smart glasses--the Moverio BT-30C--with a $499 price point and setup that's likely to make them more appealing for corporations.

I know you're thinking "smart glasses again?!?" But this time may be different. Yes, Google Glass resulted in glassholes and a lack of legitimate use cases. But like augmented reality devices like Microsoft's HoloLens, there are real returns and use cases for smart glasses. Those uses revolve around training, drones, maintenance, entertainment and productivity.

The other thing to note is that Epson has been in the smart glasses game since 2011 and has been tweaking their Moverio lineup ever since. Toss in the reality that Epson has a real sales channel and now has solved some of its compute problems with Android smartphone and Windows laptop tethering and smart glasses could be a more viable augmented reality vehicle.

"The idea is that the smart glasses now create a multi-screen canvas, said Eric Mizufuka, product manager for augmented reality at Epson America.

The experience is integrated into your line of sight. As a result, you can nod your head to get multiple screens for work. If you look down at your laptop the screen goes away. For work, that means a remote technician can toggle between manuals, enterprise apps, productivity tools and responding to someone on Slack.

Moverio BT-30C uses USB-C tethering to Android phones as a primary compute vehicle. For enterprises, this approach means that smartphones can be used more easily in the field and loaded with apps and content. Epson previously had a forked version of Android as a compute platform. Using Android devices means that there's already a broader range of apps. Windows PCs can also be connected via USB-C, but at this point the primary use case is using the smart glasses as an additional privacy screen.

There's little setup as content can be viewed once the smart glasses are tethered to a smartphone. Bluetooth connectivity wasn't used due to latency between compute and the application.

Mizufuka said the smartphone-as-compute approach should bolster use cases and target markets such as drone photography. Moverio smart glasses are a best seller at B&H Photo. "Remote assist and support has been the bread and butter application in the enterprise as well as drone use for inspections, emergency services and FAA line of sight," said Mizufuka.

Mizufuka said that the BT-30 will be demonstrated at SAP Sapphire leveraging SAP applications and corporate data.

Target markets for now include travel, tourism and entertainment, business travelers and developers.

For developers, there is a Moverio software development kit that can be used for custom apps. But generally speaking, the smart glasses can utilize apps on an Android phone ranging from simple Netflix viewing to a Google Doc or using Excel on Android.

Mizufuka said the hope is that the BT-30C will be well positioned with 5G rollouts. Better connectivity will expand the application footprint and enable multimedia experiences. The Windows ecosystem will have to develop and the primary use case would be to use the BT-30C as a privacy screen on a plane.

Overall, the BT-30C was comfortable to wear and lightweight. The device can fit over glasses and the approach resembles Microsoft's design approach. The BT-30C is designed to wear well with hard hats and work gear.

Here's a look at the specs: