Full Bio
Posted in All About Microsoft on February 24, 2019 | Topic: Cloud 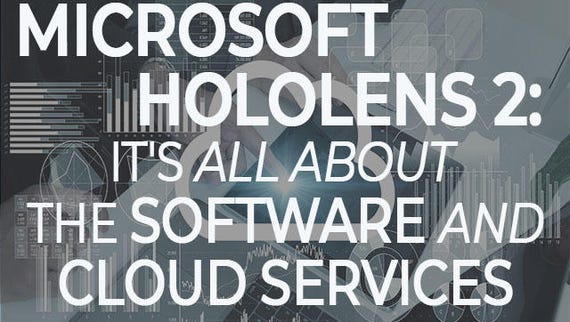 Microsoft's HoloLens 2 feels like practical magic No space spiders or Minecraft this time -- but it's much more comfortable.

Microsoft unveiled its second-generation HoloLens augmented-reality headset at Mobile World Congress and you'd think at first glance the augmented reality device is all about the hardware. You'd be wrong and enterprises would tend to agree.

While the new HoloLens includes a number of improvements meant to make it more useful, comfortable and easier to use, the real story about this device is in the software inside and connected services outside. With the HoloLens, Microsoft is deploying its well-worn hardware playbook. Is the Surface really about Microsoft being a laptop player or getting the Office 365 subscription? Is Xbox about the console or Xbox Live and subscriptions and in-app purchases?

The HoloLens is similar -- Microsoft could give away the hardware and still benefit from the Dynamics 365 or Azure subscription. Microsoft CEO Satya Nadella said at Mobile World Congress 2019 that the breakthrough computing advances will come for the company's partners and customers using the software giant's services as building blocks. Nadella cited a series of enterprise use cases that can change lives via healthcare, remote training and manufacturing. "That's what we're building technology for," said Nadella.

HoloLens 2 -- which, technically, is the third iteration of the HoloLens, as Microsoft skipped over version two -- looks somewhat different from the first HoloLens, which Microsoft began selling in 2016. It has a visor that can easily flip up; features a larger vertical field of view; offers articulated hand and eye tracking, which should make interacting with holograms more natural; and is built to be lighter and better weighted. It has a Snapdragon 850 compute engine and an on-board custom AI holographic co-processor. Microsoft is believed to be targeting the latter half of this year as its HoloLens 2 ship date.

CNET's Scott Stein has the walkthrough of the hardware changes and the improved experience.

But don't get distracted. HoloLens 2's enterprise success rides with the software and services. It's unclear whether there will ever be a HoloLens for mainstream usage.

Sources have said that the HoloLens 2 also will be one of the first devices to include the Windows Core Operating System (WCOS) -- the newest common Windows 10 core software -- at its heart. (Microsoft is only saying that the HoloLens 2 will include a variant of Windows 10, as far as I know.) Microsoft's holographic shell sits on top of WCOS. The firmware in the device enables the technological advances of the new display, camera and other components.

While HoloLens 1 could connect to Azure and to other Windows Mixed Reality headsets, HoloLens 2 is built, from the get-go, to be a cloud- and edge-connected device.

As for the returns on investment, enterprises subscribing to HoloLens 2 and connected services could save on travel and training costs. Those returns are often used to justify augmented reality pilots in the enterprise.  Some recent augmented reality use cases include:

Dynamics 365 Remote Assist, which Microsoft introduced last year, lets field service personnel connect to experts remotely to get help and instruction. They can interact hands-free since they're wearing the HoloLens. Remote Assist is a piece of Microsoft's strategy to try to get its software and services in the hands of more "firstline workers."

Remote Assist is just one of a handful of Microsoft-developed, Dynamics 365-branded HoloLens apps targeting this market. Others include Dynamics 365 Layout, a 3D layout app also introduced last year; Dynamics 365 Product Visualize for showcasing products in 3D, which Microsoft announced last week; and a coming Dynamics 365 Guides application for 3D training at scale.

Last week, Microsoft officials also announced that a Dynamics 365 Remote Assist app will be coming to Android devices and Dynamics 365 Product Visualize app will be coming to iOS devices. What officials didn't explain at that time is how users on those mobile phones will be able to see holograms at high fidelity. This is where Azure comes into play.

Currently, holographic applications can share spatial anchors between themselves, enabling users to render a hologram at the same place in the real world across multiple devices. But with Azure Spatial Anchors -- a new service Microsoft is announcing at Mobile World Congress -- HoloLens, iPhone and Android phone users will be able to work with holograms which can persist across the platforms by using a shared coordinate system. The service will provide access to a database of places that map to Wi-Fi SSIDs. Phone users will just need to download an app to be part of the shared physically and digitally blended environment.

Additionally, Azure Remote Rendering, another new service, will allow users to see super-high fidelity holograms at excellent resolution on their iPhones and Android phones. (I'm thinking this is what will enable the Dynamics 365 Remote Assist and Product Visualize apps to be useful on phones.) Microsoft will do the required image processing on Azure GPUs in the cloud and stream the results back to the phones via this service.

Microsoft also is introducing a couple of new developer kits at Mobile World Congress which are related to its HoloLens and intelligent cloud-intelligent edge strategy.

Remember "Project Kinect for Azure," a package of sensors, microphone arrays and on-board compute which Microsoft officials said developers would be able to use to build advanced computer vision and speech solutions? It's finally ready and will be known as the Azure Kinect Developer Kit. Microsoft is ready to start taking preorders for the $399 kit. The connection between the Azure Kinect DK and HoloLens 2 is that this kit uses the same time-of-flight depth sensor as the HoloLens 2 does.

Microsoft also will make available the Azure System Builder kit for customers who want to build customized HoloLens equipment, like the Trimble hardhat with HoloLens embedded inside.

Join Discussion for: Microsoft's HoloLens 2: Why it's really all...