Ethanol in gas: how much is too much?

The EPA and oil industry want to boost the ethanol content in gasoline. Automakers say the new blend may ruin your car.
Written by Melissa Mahony, Contributor on May 7, 2010 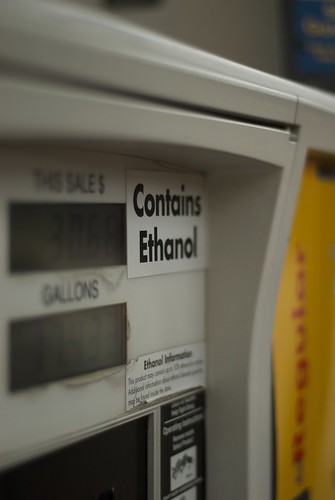 Ethanol-gasoline blends cut the carbon emissions spewing from your exhaust pipe and give the country another thing to do with all the corn it grows. The biofuel blends may even save you some money at the pump—that is, if it doesn't overheat your car's engine.

That is what the Alliance of Automobile Manufacturersfear might happen if the Environmental Protection Agencyraisesthe allowable ethanol content in gasoline from 10 to 15 percent.

The automakers say more than half the engines that they've tested with the 15-percent-biofuel blend have experienced trouble. The fuel may damage catalytic converters and engine cylinders in some cars.

One major reason for concern is that modern cars sense the amount of oxygen in the exhaust and use that measurement to modify the fuel/air mixture going into the cylinders. This works fine for straight gasoline. But the ethanol molecule contains an oxygen atom, and that may confuse the sensor into making the mixture too lean; lean engines produce exhaust hot enough to damage catalytic converters, industry experts say, and may also produce more nitrogen oxides, an ingredient of smog.

The oil companies are welcoming the extra ethanol as a way of fulfilling their renewable fuels requirements under the EPA. The ethanol industry, of course, is also pushing for the change. TheRenewable Fuels Association estimates the higher-ethanol blend could save American around 5 cents for every gallon.

Drivers could be saving significant money at the pump, were it not for the current antiquated regulations. EPA must avoid adding insult to injury by excluding up to half of U.S. drivers from utilizing cost-effective higher ethanol blends.

Automakers are urging the EPA to postpone any change to the ethanol blend until more testing is done. On Wednesday, the industries are gathering to try to work something out.