If there's one Microsoft product that's got a posse, it's OneNote. If you haven't used it, then it's free form note-taking capabilities won't mean much – but if you have, it's one of those tools that quickly gets a starring role in your daily workflow.
Written by First Take , Previews blog log-in on Dec. 12, 2010

If there's one Microsoft product that's got a posse, it's OneNote. If you haven't used it, then it's free form note-taking capabilities won't mean much – but if you have, it's one of those tools that quickly gets a starring role in your daily workflow. There's one big problem though, it's not available on enough platforms. Yes, it's there on desktops and laptops (and especially tablet PCs), and even on Windows Phone 7. iPhone and iPad users get some compatibility with the third-party MobileNoter, but what about Macs, or Android?

If you want to use note taking tools on Mac OS X, or on Android phones and tablets, there's really only one option: Evernote. It's a tool that's come on by leaps and bounds over the last couple of years, mixing note-taking with a cloud sharing service that takes your notes from phone to PC and back again, making it an ideal cross platform tool for capturing ideas and memories. But that's not enough, if you're using OneNote's integration with the rest of Office to embed note-taking into everything you do. Cut and paste is always there, but it's not the same as having a notebook that syncs across desktop PCs, with collaborative editing — and with an Office Web App in the cloud.

That's why we were pleased to see the folks behind MobileNoter come out with Ever2One Converter, a simple tool that converts Evernote notebooks into OneNote files. It's a free download, and you don't even need to have a copy of Evernote installed to use it, as it pulls data from Evernote's cloud services. 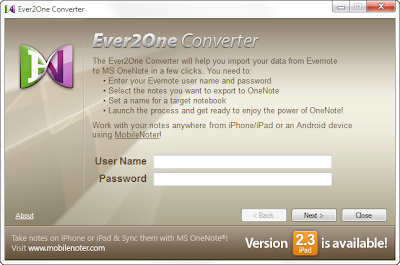 Signing in to Evernote from Ever2One

Running Ever2One is easy enough. All you need to do is give it your Evernote username and password (which isn't saved), and then choose the notebook you want to copy into OneNote. All you then need to do is give the resulting OneNote notebook a name and a location (which can be on a file share, though not on SkyDrive cloud storage as yet). You can then choose to import Evernote attributes, as well as decrypting any encrypted notes. It's then just a matter of sitting back and waiting until the notes have been downloaded, which can take some time if you've been using your camera to make a lot of image-based notes. 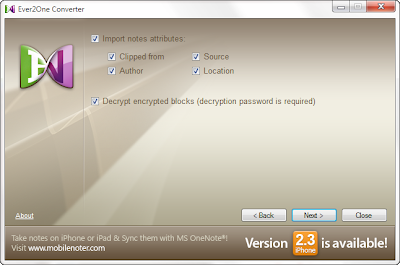 Choosing Evernote attributes to be copied to OneNote 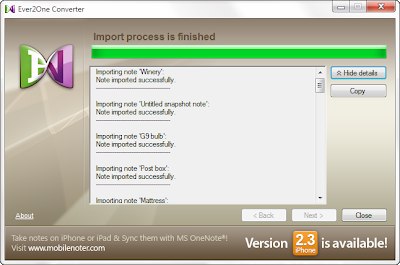 Once the data has been transferred, you can check the status of the copy

The resulting conversion isn't too bad at all. Images are clear and easy to use, and work well with OneNote's built in OCR tools. Initial dates are preserved, with location data presented as longitude and latitude with a Google Maps hyperlink. It’s not surprising that MobileNoter has done a good job in preserving fidelity between the two platforms, as no doubt they see this as a route for users to migrate from Evernote to their own mobile notetaking tools.

If you're using OneNote and Evernote, then Ever2One is, if not invaluable, then certainly a very useful tool — our only complaint is that it wasn't a two-way sync between PC OneNote and cloud Evernote. Perhaps that'll be something for version 2.0…