A consortium of robotics experts published an updated Roadmap for US Robotics -- a document that is designed to help Congress understand the current state of robotics so that policymakers can determine where to allocate resources.

The first edition was put together in 2009 by 160 people, with half of the contributors from industry and half from academia. This Roadmap led the Obama administration to create the National Robotics Initiative, which provided up to $70 million in research funding for next-generation robotics.

Robotics research has progressed dramatically in recent years, and although researchers updated the document in 2013, they revisited it again this year, ahead of the 2016 presidential election.

In the last few years, there has been significant development in drones, driverless cars, and collaborative robots. Therefore, the researchers suggest additional support (read: funding) for studies on human-robot interactions in order to integrate robots into daily life. On a fundamental level, they also urge a strong focus on STEM education.

The researchers write, "Over the last few years we have seen tremendous progress on robot technology across manufacturing, healthcare applications autonomous cars and unmanned aerial vehicles, but also core technologies such as camera systems, communication systems, displays and basic computing. All this combined motivates an update of the roadmap."

Dr. Henrik I. Christensen, a University of California San Diego researcher and the document's lead editor, tells ZDNet that the US is no longer a leader in designing robots for manufacturing. Instead, most industrial robots are built in Japan, Germany, or Switzerland.

However, he says, "In terms of medical robotics US is the clear leader, with 95 percent of the global market." The US also leads with service robots from companies such as iRobot, Symbotic, and Aethon. China and the US are top providers of Unmanned Aerial Vehicles, and the US and Germany are leading with driverless cars.

The researchers point out that China, South Korea, Japan, and India are investing heavily in higher education and research that will improve their manufacturing processes. Meanwhile, US investments in these areas have remained relatively small, although robotics is becoming essential for automation and logistics. The message is clear: the US must invest in robotics in order to keep up with fierce international competition.

Plus, contrary to fears of robots stealing jobs, investing in robotics actually correlates with job growth. The researchers write, "Over the last 5-6 years we have seen introduction of 600,000 new jobs in manufacturing. During the same period, we have seen significant growth in adoption of robot systems in industry."

We have had a fantastic collaboration with agencies in DC over the last eight years. The Office of Science and Technology Policy (OSTP) has been a strong supporter of robotics. China is emerging as a major player in robotics (they are the single largest market in the world today) and this could impact how the initiative is adopted in a new administration. 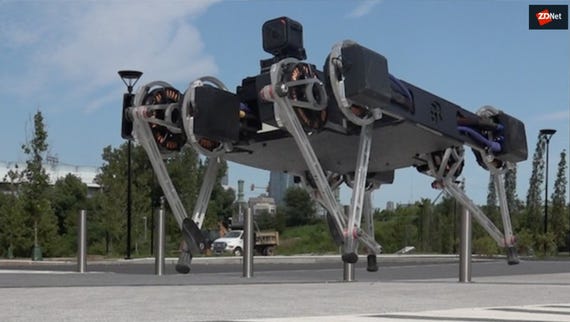