While Facebook is winning big on the web and mobile, it faces looming challenges. At F8 2017, we'll get a look at how well it's preparing for the platforms of tomorrow.
Written by Jason Hiner, Editor in Chief of ZDNet on April 18, 2017

Heading into its 2017 developer confab, Facebook is flying high on strong quarterly earnings and fresh momentum on Instagram. Nevertheless, there are new challenges coming over the horizon and the company's annual F8 developer conference on Tuesday and Wednesday will give us a good opportunity to see how Facebook is positioning itself for the future.

I'll be at F8, and here are the three questions I'll be looking to answer this week.

Facebook's place in virtual reality--AR's cousin--is well known with Oculus Rift. The Rift is currently running third behind Sony Playstation VR and HTC Vive in the VR market, and recently announced a $200 price cut. However even with all of last year's VR hype, demand for VR headsets has been tepid. The 2016 sales of VR headsets tallied up at a disappointing 6 million units and earlier this year Facebook and Best Buy shut down almost half of the 500 Oculus Rift demo stations in stores.

VR's strength is that it's so immersive, but that's also its weakness because it demands a complete takeover of your time. It also doesn't help that you have to strap a giant computer to your face and it costs $2000 for a high-end rig and new computer to run it.

On the other hand, augmented reality isn't as needy as VR in either time or money, because you can layer data and digital visualizations on top of the real world using a smartphone or smartglasses. We got a peek at the potential of AR last year when Pokemon Go attracted over 50 million users in one month. Of course, we've also seen the Google Glass AR flameout.

Nevertheless, with all the data that Facebook now knows about people, places, businesses, and events, it has a golden opportunity to make people a lot smarter about their interactions and activities. I'd be surprised if Facebook is ready to unveil a pair of smartglasses at this year's F8, although Mark Zuckerberg has admitted they are working on it. But, I wouldn't be surprised to see Facebook start to use your mobile app and your smartphone's camera to experiment with AR features that will become the foundation of the Facebook glasses of the future.

If it doesn't capitalize on this opportunity, then it risks losing ground to Google, Apple, Samsung, and others that are likely to make big moves in 2017.

Amazon Alexa has been the biggest story in the tech industry over the past year. It dominated CES 2017 without even having an official booth at the show. While the Amazon Echo and the Alexa digital assistant may appear like more of a threat to Google, Apple, and Microsoft, it has important implications for Facebook as well.

The biggest win for Alexa is that it has finally made the voice interface part of everyday life, and its high customer satisfaction scores (87% of owners are happy with the Echo) show that it is changing people's expectations for how they prefer to interact with technology. It's also changing how tech companies make money since Echo doesn't have ads but instead makes money further downstream of commerce and transaction fees.

Both of those changes pose risks for Facebook because it has no voice interface and it makes nearly all of its money on ads. If Alexa and its competitors move more users and more time away from the web and mobile to voice then Facebook will lose valuable interactions in the shift.

The challenge then for Facebook is how to make its social graph part of the voice paradigm. It makes more sense for Facebook to partner aggressively and be on all the platforms than to create a digital assistant or device of its own. I'll be looking for indications of that at F8-- particularly with Facebook M, which brings us to our next topic.

At last year's F8, Facebook talked a big game about chatbots and integrating artificial intelligence into its Messenger platform. Zuckerberg painted a vision of an AI-powered text messenger that could automate everyday tasks from booking calendar events to contacting customer service to sending someone flowers.

For all of last year's hype around Facebook M--the name of its Messenger-based AI assistant-- we've seen very little real world progress since then. Of course, Facebook M just officially rolled out publicly across the US earlier this month, so perhaps we'll hear more at F8. This is an area where Facebook can't afford to lose momentum since other tech giants--especially Google, Microsoft, and Amazon--are investing so heavily in it.

Despite the slow progress of Facebook M, this is still an area where it's tough to count Facebook out. Algorithms that show you the stuff you'll be most interested in is the heart of Facebook. It knows how to do this well, and so the challenge is extending that knowledge beyond the Facebook feed to other new frontiers.

Throughout Facebook F8 this week, keep an eye on ZDNet and TechRepublic for the most important developments that will matter for the enterprise, developers, and business marketing.

VIDEO: AR, Voice platforms, and AI: Facebook positions itself for the future 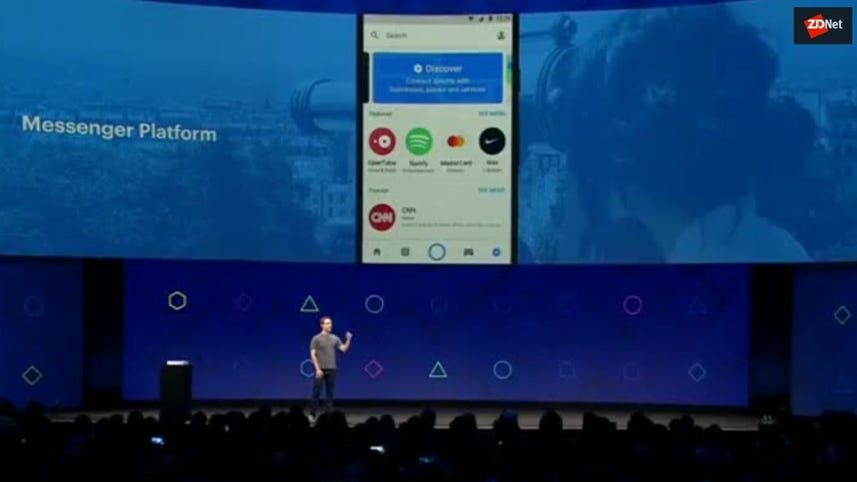