Over the weekend a ruckus ensued after it was discovered that Facebook changed two sentences to its terms of service. Originally, Facebook allowed users to delete all of their uploaded content and walk away with only archived copies left behind. That clause disappeared meaning that Facebook could continue to use your content after you quit.

A couple of weeks ago, we revised our terms of use hoping to clarify some parts for our users. Over the past couple of days, we received a lot of questions and comments about the changes and what they mean for people and their information. Based on this feedback, we have decided to return to our previous terms of use while we resolve the issues that people have raised.

Many of us at Facebook spent most of today discussing how best to move forward. One approach would have been to quickly amend the new terms with new language to clarify our positions further. Another approach was simply to revert to our old terms while we begin working on our next version. As we thought through this, we reached out to respected organizations to get their input.

Going forward, we've decided to take a new approach towards developing our terms. We concluded that returning to our previous terms was the right thing for now.

The key words there are "for now."

Zuckerberg said that the next version of the TOS will have a "substantial revision." However, users will have a say in the crafting of the privacy policy.

Overall, this approach is better. Facebook has to give users a heads up on privacy changes. While we're pondering a new TOS and privacy changes here's what needs to happen everywhere: 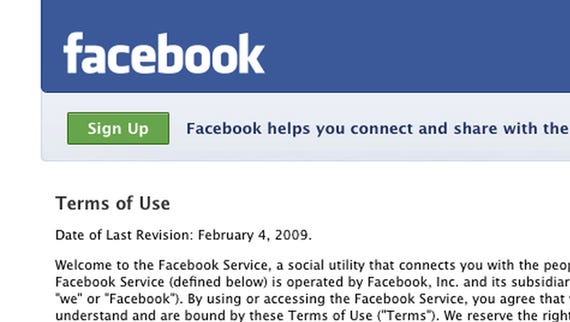