The country joins the Netherlands, France, and the European Commission in taking various actions against Facebook, including fines, over data-privacy violations.

A tracking pixel is neither a visible icon nor a cookie but a line of code loaded in the background of a webpage as internet users open a site in their browser. The code generates a miniscule image the size of one pixel, the smallest visual element on a digital screen, and indiscernible to the human eye. 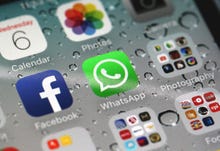 Europe fines Facebook €110m for misleading information on WhatsApp takeover Facebook allegedly used profile matching between WhatsApp and Facebook accounts for advertising purposes, having originally told the European Commission twice that it wouldn't do so.

Facebook currently allows its advertisers to create targeted marketing using Facebook pixels to tally the number of Facebook users who view their ads on the site, monitor sales conversions, and obtain surfing histories.

Once the pixel loads into a browser, it can send back the user's IP address and web activity to the advertising website's server. Outside Facebook, pixels are commonly used in the web analytics world to implement targeted advertising.

In the new set of recommendations, the Belgian regulator expressed its concern over Facebook obtaining excessive personal data for targeted advertising. It also reasserted its position that Facebook excessively tracks internet users without giving them adequate controls in the form of informed consent.

The Dutch data regulator announced earlier that Facebook violated Dutch privacy law on the same grounds. However, rather than imposing a fine, it worked with Facebook on a corrective measure that the company has implemented, although it does not address all the regulator's concerns.

France's data regulator announced that it had fined Facebook €150,000 ($168m) for violating its data-protection rules but did not opt to work with Facebook on implementing any changes.

Europe's dispute with Facebook did not stop there. The European Commission also fined Facebook €110m ($123m) for misleading regulators on how it matches WhatsApp users' data with Facebook accounts to create targeted advertisements.

Like the Netherlands, Belgium has not imposed a fine on Facebook. The Belgian data regulator will review the legality of all of Facebook's data-tracking mechanisms before a hearing takes place at the end of this year.

Join Discussion for: Facebook prying: Watchdogs hit back on excessive...