Facebook has begun labelling media outlets it deems to be "state-controlled", which it assesses based on various factors such as government influence and ownership. It will also slap similar labels on ads from these publishers later this year in a move, it says, is aimed at providing greater transparency.

The social media platform on Thursday kicked off efforts to label media organisations that were "wholly or partially" under the editorial control of their government. It had announced plans to do so last October as part of a string of initiatives to curb election interference on its site.

Applying labels to state-controlled media outlets would offer "greater transparency" to readers who should know if the news comes from publications that might be under the influence of a government, Facebook's head of cybersecurity policy, Nathaniel Gleicher, said in a post. He added that similar labels would be placed on ads from these publishers later this year. 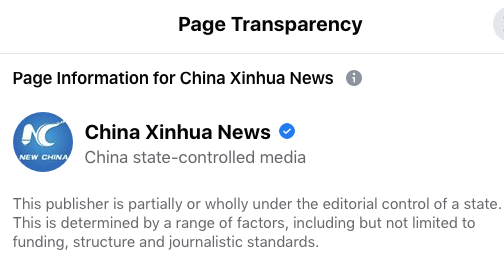 Applied globally, these labels would be placed on the publication's Pages, Ad Library Page, and Page Transparency sections. They will also be extended to posts in News Feeds in the US over the next week, Gleicher said.

In addition, later this year, ads from such media outlets would be blocked in the US "to provide an extra layer or protection" against foreign influence in the public debate around the upcoming US elections in November, he said.

Such labels, however, would not be added to US news outlets because Facebook believed these organisations, including those run by the US government, had editorial independence, Gleicher said in a Reuters report.

In establishing its policy criteria, he said in his post that Facebook consulted more than 65 experts worldwide who specialised in media, governance, and human rights development to understand the "different ways and degrees" to which governments exerted editorial control over media companies.

He noted that the defining qualities of state-controlled media extended beyond government funding and ownership and included an assessment of editorial control. To determine if publishers were wholly or partially under the government's editorial control, he said Facebook looked at various factors including the media organisation's mission statement and mandate, ownership structure, editorial guidelines around sources of content, information about newsroom staff, funding source, and accountability mechanisms.

Country-specific factors, such as press freedom, also were assessed, he said.

Government's proposed bill to combat online falsehoods gives the administration "full discretion" on whether a piece of content is deemed true or false and this level of "overreach" poses significant risks to freedom of expression, cautions an industry group representing major internet and technology companies including Facebook, Google, and Twitter.

While it is moving to stick labels on such media outlets, Facebook is less willing to do so for other types of content. CEO Mark Zuckerberg recently came under fire for refusing to take action against posts from US President Donald Trump, including one that appeared to incite violence against protesters in the country. The post, which first appeared on Twitter and was reposted on Facebook, was later restricted on Twitter for breaching its policies on glorifying violence. Zuckerberg, however, specifically declined to enforce similar action, prompting several of his employees to stage a "virtual walkout" in protest.

Facebook last September said advertisers running campaigns on social issues, elections, and politics on its platform in Singapore would have to confirm their identity and location, and reveal who was responsible for the ads. It said the move was part of efforts to stem the spread of "misinformation" and help block foreign interference in local elections. It also came amid calls from Singapore's Minister for Law and Home Affairs K Shanmugam for regulations to deal with "hostile information campaigns".

Facebook earlier this week complied with a Singapore government directive to block local access the National Times Singapore page, but described the order as "severe and risk being misused to stifle voices and perspectives" online. The social media platform in February also had adhered to the government's order to block local access the States Times Review page, whilst highlighting it was "deeply concerned" that the move stifled freedom of expression in Singapore.

Such government directives were enabled by the country's Protection from Online Falsehoods and Manipulation Act (POFMA), which was passed in May last year, following a brief public debate, and came into effect on last October along with details on how appeals against directives could be made. The Bill had passed despite strong criticism that it gave the government far-reaching powers over online communication and would be used to stifle free speech as well as quell political opponents.