Singapore accounts for half of Netflix government takedown demands

Media streaming company says it has removed nine pieces of content due to government requests worldwide since it began operations 23 years ago, with five such requests issued by the Singapore government.
Written by Eileen Yu, Senior Contributing Editor on Feb. 8, 2020 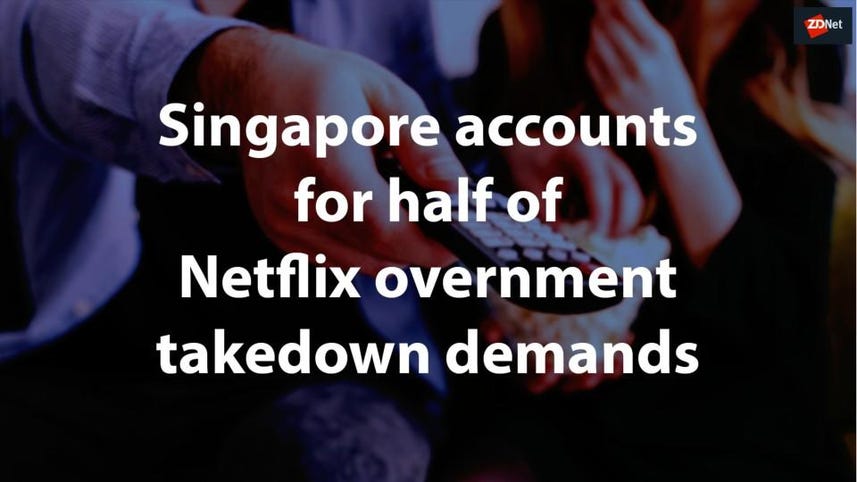 Netflix says it took down nine pieces of content across its global platform since it began operations 23 years ago, after receiving government demands to do so. The majority, five of such requests, came from the Singapore government, which issued its most recent demand earlier this year involving The Last Hangover.

The US media streaming company revealed the details in its first report, called Environmental Social Governance, which it said would provide more transparency on the impact of its platform on society and its governance structures.

It added that it would release similar reports each year to provide its investors and "other third parties" information about the company's impact in society. The report, first highlighted by Axios, is benchmarked on the US Sustainability Accounting Standards Board framework.

Netflix said in its report: "We offer creators the ability to reach audiences all around the world. However, our catalog varies from country to country, including for [broadcasting] rights reasons [and] in some cases, we've been forced to remove specific titles or episodes of titles in specific countries due to government takedown demands."

It did not specify how many such requests it received in total, noting only that it complied to remove nine titles as of February 2020. Netflix has 167 million subscribers in 20 countries.

In 2018 alone, it acceded to the Singapore government's takedown demands regarding three titles: Cooking on High, The Legend of 420, and Disjointed from the service in Singapore only. The three films discussed the use of cannabis or marijuana, which is illegal in Singapore.

The country last year also demanded that The Last Temptation of Christ and, so far this year, The Last Hangover be removed from Netflix's local catalogue. Both titles depicted storylines sensitive to the Christian faith. Singapore has strict laws governing content deemed offensive to religion or race.

Netflix entered the Singapore market in 2016.

Takedown requests were from governments in New Zealand in 2015, Vietnam and Germany in 2017, and Saudi Arabia in 2019.

Netflix said it also had invested efforts to build up a workforce and content base that reflected the diversity of its global audience. These included its ability to dub and subtitle in more than 40 languages. It noted that the volume of programming its subscribers watched that did not originate from their home country or the US climbed by 10%. Foreign language content in its domestic US market also grew 23% year-on-year, it added.

Hope rests on Netflix to shake up Singapore TV market

But much will depend on its ability to negotiate content agreements and compete with pay TV incumbents, which may have the financial muscle to lock Netflix out of some deals.

Twitter, Google, and Facebook faced a parliamentary committee set up to examine the impact of "deliberate online falsehoods"--with Facebook, specifically, grilled over the Cambridge Analytica breach.

Passed in May 2019 after a brief debate, the Protection from Online Falsehoods and Manipulation Bill will come into effect from October 2 onwards. It includes an appeals process that costs SG$200 to file and could be heard in the High Court within nine days.

Operated by Lawyers for Liberty, the website appears to have been blocked in Singapore following an order issued after the human rights group failed to comply with a previous correction directive. The group has sued the Singapore government over the order.

Unlimited beats: How to get one year of Beatopia for $99

Unlimited beats: How to get one year of Beatopia for $99