How can CIOs make best use of social media? Should they stick to using tools like Twitter and Facebook for personal reasons, or should they engage with a wider community in order to boost their own brand and the perception of their business?

IT leaders share their advice on how to manage social media usage in the workplace.

1. Understand the key role of collaboration in modern culture 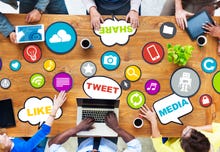 Smart sharing: A business without social media is an office without a door

What are you, as a business person, supposed to say -- and not say -- on social media? David Gewirtz shares some guidelines on personal and professional branding.

Neil Moore, head of ICT at Hampshire Fire and Rescue Service, says he gets a lot of value out of social media. "It's great to know what the buzz is," he says. "I frequently pick up good leads about things that are going on. That allows me to go and explore any new concerns in more detail."

Moore says his main tool for social media is Twitter, while Facebook is more of a personal tool. He says that preference is a not hard-and-fast rule for other workers in the organisation.

"I do have work colleagues that connect and collaborate through Facebook," he says. "We can't avoid social media. It is part of our daily lives. But why would we want to avoid it anyway, when it can deliver great value?"

2. Use whatever tools you can to prove the value of your work

Chris White, CIO at legal firm Clyde & Co, is another IT leader who is keen to make the most of social technology. White, who uses both Twitter and LinkedIn, says collaborative technology, when used effectively, can be another tool in the CIO's leadership kitbag.

"There's nothing wrong with being on social media," he says. "My belief is that a social profile can help raise the brand value of the organisation you work for. My updates are very rarely about IT -- what I tend to talk about is the business and our current projects and long-term aims."

White believes, therefore, that there is a place for social selling. "C-level executives are first and foremost leaders," he says. "I'm the conductor of the orchestra -- I know how to make a great tune; my job is to make sure that all the right people are in the right place at the right time."

3. Think carefully about the implications of your interactions

Tonino Ciuffini, head of information assets at Warwickshire County Council, says senior officials at his organisation understand the power of both social media and social selling.

"Our head of human resources is great at pushing the right messages to the community," he says. "We're also seeing more councillors using social platforms to talk about key issues."

Ciuffini notes the power of social engagement in a business context, although he mainly uses Twitter for personal reasons. Unlike many of his CIO peers, Ciuffini is not a member of LinkedIn. "It's not for me," says. "I get a lot of sales calls and I can't afford to spend more of my time being chased by people."

When social media is used in a business context, Ciuffini says executives and all staff members must proceed with care. "People will add clauses to their accounts stating that what they're talking about is a personal opinion rather than a corporate view," he says. "But you also have to recognise that what you say sticks around on the internet."

4. Focus on engagement rather than selling

Like Ciuffini, Rentalcars.com CIO Graham Benson understands the potential collaborative power of tools like Facebook and Twitter, yet he also says executives must be careful to use the technology in the right way. "Social media has its place in the business but you need to be careful how you use it," he says.

Benson, for example, says he sends the occasional tweet about some of the projects he is helping to support as chair of Manchester Digital, which is the independent trade association for digital business in the north west of England. Updates about his work as CIO at Rentalcars are rare.

"A lot of the things I'm thinking about are company confidential," says Benson. "If I do get involved in social media, I tend to tweet or post about the cultural side of the business to build the corporate brand and increase our awareness and attractiveness as a potential employer."

Benson recognises there is an increased appetite in the market for firms to monetise social media activity, yet he is not keen to adopt the approach. "Social media should be about audience engagement, either through brand building -- be that personal or corporate -- or as a reactive customer service channel," he says. "In my experience, the audience does not react well to an organisation using social media as a sales tool."

Matt Britland, director of ICT at Lady Eleanor Holles School, is a big user of social media. Alongside his day job, Britland is also director of education consultancy Realise Learning. His advice to other IT leaders is to embrace social technology.

"Social media can help you to promote your brand as an individual," says Britland, who has used various channels to promote his work. "It helps you to spread your ideas and opinions about technology in your sector."

Although he recognises the potential power of social selling, Britland also tries to separate personal and professional networking. Most of his tweets, for example, tend to be focused on what he believes are interesting news items. Britland also runs a personal blog that focuses on good educational practice.

He understands that some IT leaders and education professionals are still reticent to use social technology. However, Britland believes engagement can produce big rewards.

"Social media provides a great support network," he says. "You can ask questions and find answers from your peers. You can, for example, point people to some of the things you've been trying and get their feedback."