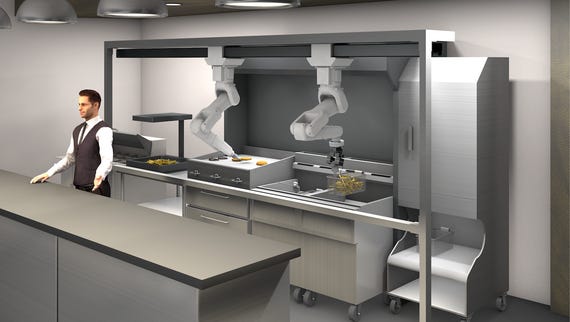 After a successful pilot program to test a robotic fry cook this summer, White Castle will expand the automated cook concept by ten times. The pilot, which began this summer, and the newly announced expansion both come as COVID-19 shakes up the restaurant industry and drives new automation technologies to increase efficiencies and sanitation.

The robot, which we've covered since it came out of stealth, is built by Miso Robotics. It's called Flippy, Robot-on-a-Rail (ROAR), which is an update to an earlier autonomous fry cook concept. During the pandemic, a huge market opportunity has emerged for automation in food preparation. Flippy can reduce human contact with food during the cooking process while bringing fast food concepts an innovative quality control system built atop sensors and intelligent monitoring, which can anticipate kitchen needs to keep food temperatures consistent. White Castle, which bills itself as the first hamburger fast food chain in country, will be bringing the newest version of Flippy, Robot-on-a-Rail (ROAR), to an additional 10 kitchens.

"Artificial intelligence and automation have been an area White Castle has wanted to experiment with to optimize our operations and provide a better work environment for our team members," said Lisa Ingram, CEO of White Castle. "We believe technology like Flippy ROAR can improve customer service and kitchen operation.  This pilot is putting us on that path – and we couldn't be more pleased to continue our work with Miso Robotics and pave the way for greater adoption of cutting-edge technology in the fast-food industry."

One of the big advantages of Flippy ROAR for a 24-7 restaurant is that it's able to optimize staffing during late night shifts, which are tough slots to staff reliably. In 2020, the technology also facilitates social distancing at work by removing one or more staff members normally assigned to the grill. Of course, both Miso Robotics and White Castle downplay the potential reduction of staff, focusing instead on how existing workers are able to focus on front-of-the-house needs, as well as order fulfillment for delivery and takeout. And in fairness, the pandemic has made safe staffing difficult, so there's a good argument that an automation implementation like this actually helps keep stores open and workers working.

The system is as much an operations management platform as a cooking robot. Production speeds can be monitored to maximize efficiency and reduce wait times, and the robot can cook an average of 360 baskets of fried foods a day.

"We have been so excited to work closely with White Castle to optimize Flippy ROAR to meet the needs of their kitchen for increased production, team member optimization and quality assurance," said Buck Jordan, Chairman & President of Miso Robotics. "Our platform has become increasingly powerful and intelligent – allowing us to quickly scale, integrate into operations and show our ability to help keep customer service standards on par with White Castle's industry reputation of excellence. As we move into the next phase of our partnership, we look forward to accelerating our results and delivering even greater value across White Castle locations."