T-Mobile will pay a $48 million settlement for misleading customers about its "unlimited" data plan, the Federal Communications Commission announced on Wednesday. 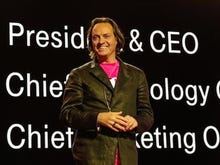 The FCC said it received hundreds of complaints from subscribers at T-Mobile and MetroPCS (a T-Mobile subsidiary) starting in 2015, saying that mobile data became virtually unusable during certain hours of the day.

That's because T-Mobile has a policy of "de-prioritizing" its unlimited data users who use a heavy data load during network congestion. The FCC said this violates its 2010 Open Internet order that requires internet providers like T-Mobile to disclose accurate information about its service.

The FCC said on Wednesday T-Mobile must update its disclosures, terms and conditions, and other documents to make customers aware of its "de-prioritization" policies.

"T-Mobile will clearly and conspicuously disclose material restrictions on the amount and speed of data," the FCC said.

The FCC slapped T-Mobile with a $7.5 million fine and said it must provide $35.5 million in "consumer benefits" to T-Mobile and Metro PCS customers. Benefits include discounts on T-Mobile accessories and services.

T-Mobile must also donate $5 million to help bridge the "homework gap", providing mobile devices and data to underprivileged high school students across the US starting in October 2017. The FCC said T-Mobile will enroll 5,000 students per quarter over four years, totaling up to 80,000 students.

T-Mobile CEO John Legere said in a tweet on Wednesday that T-Mobile believes "more info is best for customers". He added, "Glad we could help schools with this solution as well."

AT&T was the subject of a similar FCC fine in 2015 over its unlimited mobile data practices, to the tune of $100 million. Further, the FCC recently came down on Comcast for billing customers for services never ordered.