Fedora 16, codenamed "Verne", is due to be released today. Fedora has decome the "poster child" for the Gnome 3 desktop, since being the first of the major distributions to use it (in their Fedora 15 release).
Written by J.A. Watson, Contributor on Nov. 8, 2011

Fedora 16, codenamed "Verne", is due to be released today. Fedora has decome the "poster child" for the Gnome 3 desktop, since being the first of the major distributions to use it (in their Fedora 15 release). So there are a lot of high hopes associated with this release, people are really anxious to see if the Fedora/Gnome 3 desktop is improving as it matures. At first glance, it doesn't disappoint: 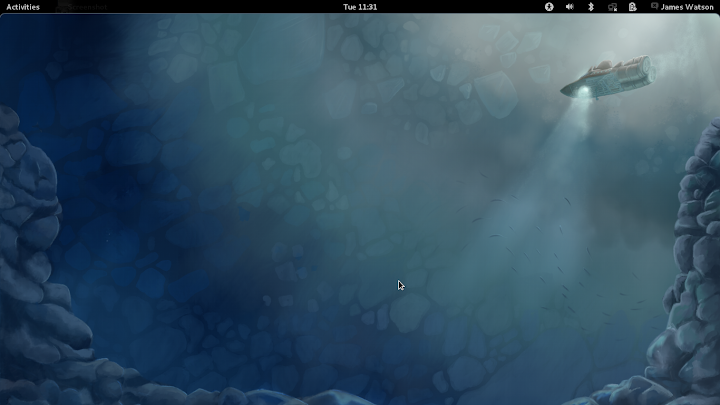 The wallpaper is apparently chosen to go with the name (Verne) theme. I shudder to think what the next release will look like (Fedora 17 has been named "Beefy Miracle"). In any case, this is exactly the desktop people have come to expect from Gnome 3 - a single panel at the top, with a clock in the middle, some icons and controls on the right side and Activities (menu/launcher) on the left side. The Activities menu/launcher can be accessed in three ways (that I know of): click "Activities" on the panel, or move the mouse all the way into the top right corner of the screen, or press the "Windows" key (or whatever the politically correct name for that key is now). The resulting Activities display looks like this: 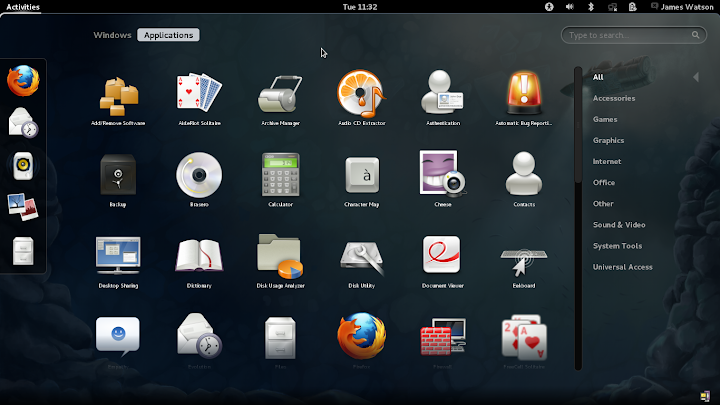 There are several interesting areas on this screen. First, on the left side, is the "Favorites" panel. This comes pre-configured as shown, with a web browser, mail/news client, music player, photo manager and file manager. Users can add whatever they want to this by right-clicking on the icons and choosing "Add to favorites". At the upper left of the screen is the "Windows / Applications" selection. Selecting "Applications" gives you the icon/menu layout shown here, while selecting "Windows" gives you a window and desktop manager view. The center of the screen shows icons for the available applications and utilities; the right side of the screen contains a menu-list of groupings of icons, quite similar to the Gnome 2 menu hierarchy. The upper right of the screen is the search/launch area, where you can type search terms or fragments, and corresponding icons will be show in the center. I would like to emphasize for those who have not already discovered it, that you don't need to move the mouse to the search area and click to enter your search criteria; whatever you type on this screen goes to that area, so in practical use all you have to do is hit the "Windows" key and then start typing.

One other thing that I noticed while writing this. Well, re-noticed actually, since I had seen it before but then forgot about it. Look carefully at the bottom right corner of the screen - see that tiny icon down there? When you plug in removable media (i.e. a USB flash drive, CD/DVD drive, SD memory card, etc.), this icon appears. I find this an interesting alternative to actually putting a normal icon on the desktop (as was done with Gnome 2, but would of course be "against the rules" in Gnome 3), or having the "Removable Media" icon in the bottom panel, as is done with KDE. When you first plug in a removable device, a larger box pops up at the bottom of the screen, offering you the chance to open the file manager on the new device, or to eject the media. That large box goes away once you select one of the options, or activate something else, and the tiny icon appears at the bottom right corner. Click on that icon, and you get the same two choices - file manager or eject - in a smaller window. I think that is a clean, convenient and useful design. 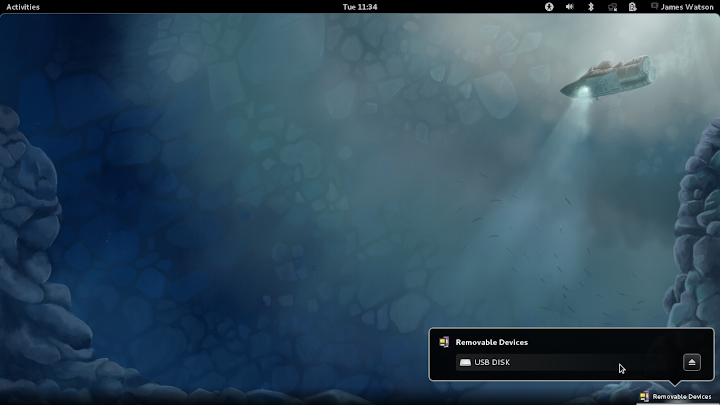 So, what does Fedora 16 contain? Well, Linux kernel 3.1.0 for starters (apparently they finally worked out their naming problems with kernel version 3.x). Firefox 7.0.1, which is still the "latest version" for a few more hours... Evolution for email, Rhythmbox for music, and Shotwell for photo management. There is no Office suite included in the base distribution, but LibreOffice, OpenOffice, KOffice or whatever can easily be installed from using the package manager. Also included is the Totem Movie Player, Cheese for webcam photo and video recording, and Empathy for instant messaging and VoIP.

But... well.... it looks like it should be another good Fedora release. Unfortunately, I won't be using it much, if it all. For a variety of reasons, the base distribution doesn't work on a lot of my systems. First, most importantly and most irritatingly, it STILL doesn't include a driver for the Broadcom 4313 WiFi adapter. I just don't understand this. I know, this driver was left out of Fedora 15 because it was still in "staging". But it's not any more, it should be a standard part of the Linux kernel 3.x distribution, and EVERY other Linux distribution that I have tried with a 3.x kernel included it. The stock answer with Fedora 15 was that you could load the "broadcom-wl" driver from the RPM Fusion repository, but I can think of several objections to that - not the least of them being that average users don't want, need or understand that process. This is one of the things that gives rise to the stupid rants about "the nightmare of Linux device drivers". From what I can tell, the new answer for Fedora 16 is that you can get either "broadcom-wl" or "brcmsmac" from RPM Fusion, and my response is the same. Come on, seriously, this is a very commonly used WiFi adapter, Broadcom has released an open source driver for it, I just don't see why it would not be included. Second, less serious in general but still an obstacle for me, the blasted Symantec ClickPad in my HP Pavilion dm1-3105ez doesn't work properly - it's the usual mess, right-click doesn't work at all and click-drag is so erratic that it is unusable.

I assume that these problems are specific to a relatively small number of systems and devices. Most people will be able to download and install Fedora 16, and they will be up and running in no time at all. So if you are interested, give it a try.

Update 18/11/2011 - The Broadcom brcmsmac driver has been added to the Linux kernel by the latest Fedora updates, so netbooks/notebooks with newer Broadcom WiFi adapters, such as the 4313 I mention above, are now fully supported by Fedora 16. This is very good news!