U.S. and allies are escalating the use of robots in training exercises, increasing speculation that unmanned platforms will see heavier use on tomorrow's battlefields
Written by Greg Nichols, Contributor on April 9, 2018 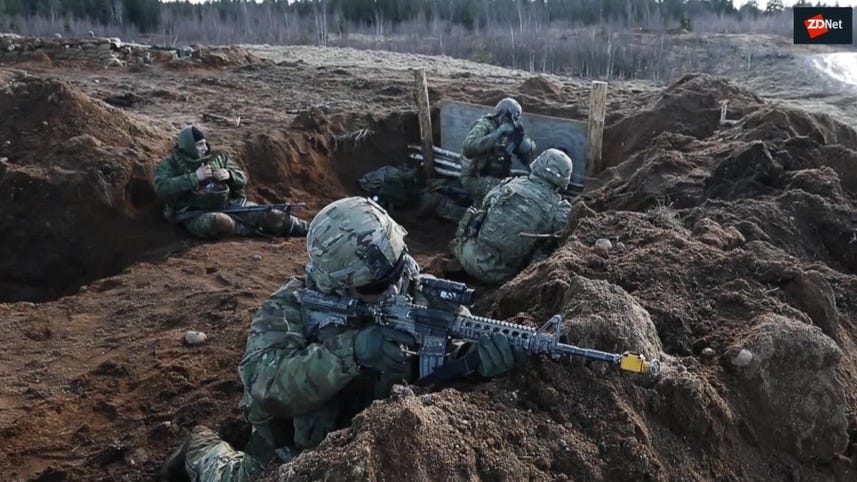 Robots cleared obstacles and breached barriers for manned tanks in a joint U.S.-British training exercise and demonstration in Germany on Friday.

It's the first time robots have been used for that purpose.

"We did a robotic breach today, which has never been done before," 1st Lt. Cody Rothschild, an officer with the 1st Infantry Division's 2nd Armored Brigade Combat Team, told the military organ Stars & Stripes. "This is a great step forward for the Army, and for robotics."

Various branches of the U.S. military have been involved in tests of autonomous and tele-operated systems in the past year.

The Marines have been testing various robotic platforms to aid in beach landings, as illustrated in the embedded video.

The recent exercise in Germany sought to test the effectiveness of using unmanned systems for one of the most dangerous assignments in warfare, one that typically falls to engineering corps: clearing breaches on active battlefields.

During the exercise, remote-controlled robots cleared landmines and created a land bridge over a portion of a tank trench while M1A2 Abrams tanks and Bradley Fighting Vehicles provided suppressing fire.

Under combat conditions, enemy fire would be directed at the trench to prevent such a breach, making the job incredibly dangerous.

Keeping troops out of harms way is laudable, of course.

But, as I've written, there may be consequences to replacing manned vehicles with unmanned systems in combat. Operators in the field could be less likely to hesitate before engaging an unmanned system, upsetting long-standing operational restraints that serve to avert escalation to armed conflict.

For soldiers on the ground, an important voice in any conversation about the future of warfare, it's clear robots are a hit.

"It keeps us safe from being out there like sitting ducks," Pvt. Jonathon Ramirez, an engineer with 2ABCT, told Stars & Stripes.

War planners are currently weighing the situational advantages of combat robots against the potentially far-reaching consequences of introducing those systems.

That dam, however, may have been irreparably breached in 2001 with the first use of a strike-capable Predator drone by the CIA.

The Bureau of Investigative Reporting found evidence of over 2,600 unmanned drone strikes by U.S. forces in Pakistan, Afghanistan, Somalia, and Yemen in 2017.

The vast majority of those strikes were carried out by remote pilots stationed in the U.S.