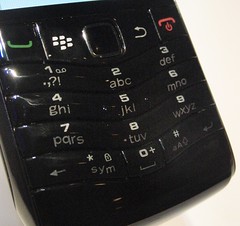 The Pearl 3G with a numeric keypad

The new Pearl 3G is a BlackBerry through and through, but it's designed to appeal both to business users who don't want to be weighed down by a larger device and to ordinary phone users who want to graduate to a smartphone but are put off by QWERTY. The optional phone keypad on the 9100 still uses RIM's SureType for predictive text and autocorrection, and this works surprisingly well; it's not perfect but you can start typing and usually either get the word you want straight away or select it from the pop-up menu. 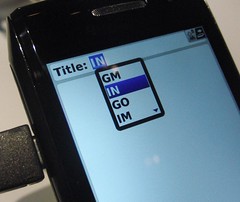 This is also the first Pearl to get the optical trackpad introduced on the Curve and Bold models last year; again it's very responsive and easy to use with your thumb while you're holding the Pearl in one hand. There are dedicated volume keys on the side of the Pearl and across the curved top — which echoes the lines of the Storm and Bold 9700 — are media control keys: rewind, play/pause, mute and fast forward.

The Pearl 3G is a little smaller than the previous Pearl models at only 50mm wide - and it weighs just 93g with a 1150mAh battery that gives over five hours of 3G talk time (or 30 hours of listening to music). The 360 by 400 screen is still small for a smartphone, but it's bright and clear and the 238dpi resolution gives you crisp images on photos and web pages when you zoom in. The faster (624MHz) processor and extra memory in the Pearl 3G make it extremely responsive, even on script-heavy web pages like Flickr where we could scroll through the images in the photostream widget almost instantly. Videos also play smoothly with excellent resolution and quality.

The Pearl 3G's 256MB of on-board memory means there is plenty of space for apps compared to earlier models. The microSD slot will take cards up to 32GB, and although the slot is under the battery cover you don’t have to remove the battery to change cards. Instead of the slide-off backs of other BlackBerry models, the Pearl 3G has a small notch at the bottom the cover: pull it with your fingernail and you can get right at the memory card slot. You'll need a microSD card if you want to take advantage of video recording with the 3.2-megapixel camera, which has zoom, auto focus and flash for still images. 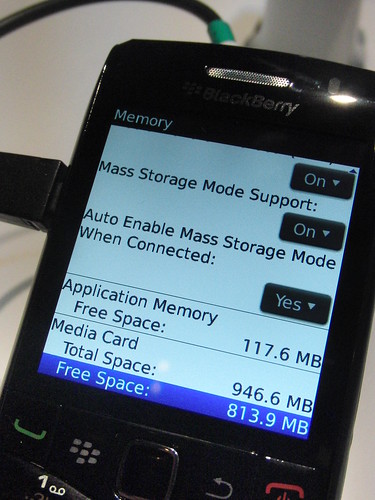 The Pearl 3G has more memory for apps

The 3G radio in the Pearl 3G has tri-band support for 3G/HSDPA networks, and quad-band EDGE/GPRS, as well as Bluetooth and GPS — and 802.11n wireless (as well as b and g). We wondered how RIM had managed to squeeze 802.11n into such a small device and RIM device VP Mike McAndrews explained that the Pearl 3G is certified for 802.11n but doesn't have MIMO antennae; "there's a certain minimal separation distance you have to have between the antennae for MIMO and that's actually larger than the device", he said. McAndrews wouldn't commit to specific figures on improved bandwidth with 802.11n, but said it was faster — and thanks to "the very power-saving chipset we have in here" it doesn't use more power than 802.11g.

The Pearl 3G is available in pink, purple, white, black and a red-to-black gradient, although RIM doesn't expect all mobile operators to carry all five colours. There's a range of leather and silicon cases that co-ordinate with the new colours — especially with the phone keypad you wouldn't know it was a BlackBerry until you start using it. Devices should be available by the end of May 2010 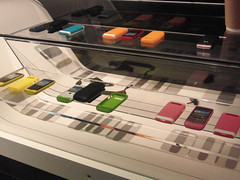 At the other end of the spectrum, MVS turns a BlackBerry into a standard office phone and version 5 does it over Wi-Fi. It has the same advantages as previous versions, allowing users to use standard office extension numbers and get their work voicemail from their BlackBerry and letting them give out one number to business contacts but being able to make calls and access voicemail over Wi-Fi makes it a much more attractive option for businesses because it can mean significant cost savings, especially if it's used to replace cellular connections while devices are in range of of corporate Wi-Fi networks. Devices will be able to connect using 802.11 a/b/g (or n if you're using the new Pearl 3G).

BlackBerry admins can choose whether to force BlackBerry handsets to only make calls over Wi-Fi VOIP, have them prompt users before making mobile calls so they know they're more expensive, or to have them switch to Wi-Fi automatically when they're in range of the company wireless network. "We're messing with the dial tone," RIM platform VP Alan Panezic told us, "and that's something people expect to work so we've integrated high availability into the product". To make sure voice quality is good enough, you can choose which Wi-Fi networks to use VOIP on — so you can automatically switch to Wi-Fi calls at work and at home but not when you're in an airport where the network isn't fast enough. All you need to connect to MVS over Wi-Fi is a VPN connection back to a corporate network hosting MVS servers. If there are problems with a Wi-Fi connection users can seamlessly switch back to a cellular connection — without ending the call. RIM is still working on automating handovers between cellular and WiFI connections, as devices will need to be able to support Wi-Fi fingerprinting.

With the initial Cisco PBXs at launch MVS 5 doesn't support ad hoc conferencing over Wi-Fi but you can put a call on hold (the system plays hold music so the other caller knows you haven't lost the connection), transfer to another extension or move a call from your BlackBerry to your desk phone (or vice versa, so you can take a call with you when you leave the office or move it onto your desk phone when you arrive). While Cisco is the launch partner for MVS 5.0, RIM will be adding support for generic SIP platforms, so you'll be able to integrate MVS with a wide variety of IP PBXs. RIM is currently developing a SIP PBX certification capability, which will enable PBX manufacturers to test for compatibility with MVS.

You can use your BlackBerry to schedule when calls should automatically go to your BlackBerry and when they go to the phone on your desk, so if you work from home one day a week you can have calls come to the BlackBerry without ringing in the office but you don't have to remember to send calls back to your desk at 6pm.