Microsoft's cloud productivity suite has finally launched, with tools for small, medium and large businesses. With more than 200,000 businesses testing the beta, there's not much difference between the beta and the final release – and Microsoft is confident enough to launch it in 40 different markets at the same time, with UK partners including Vodafone.
Written by First Take , Previews blog log-in on June 29, 2011

Microsoft's cloud productivity suite has finally launched, with tools for small, medium and large businesses. With more than 200,000 businesses testing the beta, there's not much difference between the beta and the final release – and Microsoft is confident enough to launch it in 40 different markets at the same time, with UK partners including Vodafone.

The final Office 365 has all the features of the beta code we looked at recently, giving you all the Office family of servers in the cloud. That means you'll get a full featured Exchange service with Outlook Web App as a web mail client, Sharepoint for collaboration (most subscriptions also include the Office Web Apps for Word, Excel, PowerPoint and OneNote), and Lync for voice communications. 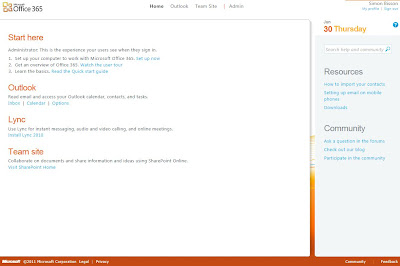 The biggest difference between Office 365 and its various competitors is that it's an instantiation of Microsoft's Software+Services vision. You can use it through the web (and the web UI is the only way to administer accounts, users and services), but if you're an information worker you'll get the most from it through the familiar Office desktop suite – and that means most users won't even touch the web. That's a good thing, as there's minimal training needed to get users started. Migrating existing servers to the cloud can take time, and Microsoft provides guidance for making the transition as seamless as possible.

There are some issues – the lower end small business plans don't support SSL connections for SharePoint Online. That's all very well if you're using it at your desk all the time, but it's a problem for anyone using SharePoint in a coffee shop or an Internet café. And while you're only paying £4 a user a month for service, it may be too much of a price to pay for securing your data. As a result we're inclined to recommend that you only consider using the more expensive E plans.

While they cost at least £6.50 a month (and we'd recommend the more expensive E2 and E3 plans), they do give you an integrated Active Directory and more in the way of administration tools. With E3 costing £15.75 a user a month Office 365 is more expensive than Google Apps. That's not as much of a problem as it seems, as you get a license for the Office Professional Plus desktop tools as part of the deal, along with the Office Web Apps and the online archive and audit tools you'll need to ensure regulatory compliance.

It's important to be careful which version you choose – it's not easy to switch from version to version, and you're in for the long haul. The Kiosk plans are design for task workers, and have limited functionality – especially when compared to the higher end E plans.

There is one area where you need to be careful with cloud services like Office 365. UK users will need to remember that as a US company Microsoft is bound by US legislation, including the PATRIOT act. This could mean that UK/EU data being repatriated to the US – possibly without any notice. This could put you in breach of your data protection commitments, and you'll need to consider carefully whether this might affect your business.

We're quietly impressed with Office 365. The feature set is good, and it integrates well with existing infrastructures and services. It makes a lot of sense for smaller organisations that may not want the expense or the inconvenience of running their own infrastructures. Outsourcing to the cloud and to Microsoft makes a lot of sense, if you're already planning on using Office and any of the Office servers. You're not limited to working in the browser, and there's even a credible offline story for SharePoint collaborations.

Microsoft is looking for out-of-support versions of Office, here's why