If you're always rushing around the office setting up servers and fixing computers, how much exercise do you really get? If you want to stay in shape over the festive season, or look forward to keeping a New Year's Resolution to be more active, you have to measure how active you are already.
Written by First Take , Previews blog log-in on Dec. 11, 2011

If you're always rushing around the office setting up servers and fixing computers, how much exercise do you really get? If you want to stay in shape over the festive season, or look forward to keeping a New Year's Resolution to be more active, you have to measure how active you are already. If you don't measure something, you can't improve it — and the same goes for your body. The latest version of the popular Fitbit digital pedometer is now available in the UK; the £79 Fitbit Ultra uses the same kind of accelerometer that's in a Wii to turn walking an extra block and taking the stairs instead of the lift into a game, complete with badges and achievements that you can feel good about — or share with your social network. 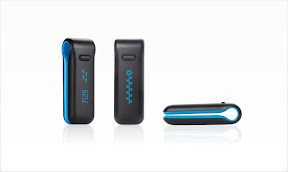 The Fitbit Ultra itself is an unobtrusive but stylish clip you can hook onto your belt or tuck into a pocket. Put it somewhere safe because it's small enough to lose as well as small enough not to notice you're wearing it (a big advantage over more intrusive measuring devices). The Ultra includes a snap-on belt clip, but we didn't find many belts or clothes the Fitbit wouldn't attach to securely on its own. The outside looks like featureless black plastic (with the inner surface highlighted in turquoise or plum plastic) until you press the tiny button to turn on the OLED screen. As well as showing your statistics, this randomly gives you cheerful greetings, offers the odd 'high five' congratulation or nags you gently if you're moving less than usual (but as it was in a pocket or on a belt we didn't usually see much more than the morning 'hello'). The messages are friendly rather than pushy, and they do make something that could be intrusive feel approachable — and it might make you look at it more often. 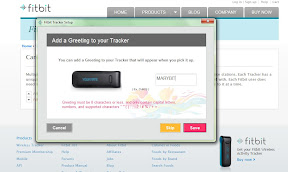 Each time you press the button the display cycles through different information; number of steps that day, distance travelled, calories burned, flights of stairs climbed, a flower that grows to show how active you've been and the time. You can turn off any of the measures you don't find useful, but having the time on there makes you more likely to check the Fitbit Ultra, and more likely to be encouraged to go take some exercise. And the calorie count includes not just the exercise you've taken but the 'resting calories' your body uses just by breathing, digesting and all your other bodily processes — so it's much more encouraging than a measurement that only tells you the 'extra' calories you burn. 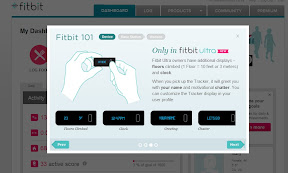 Compared to the original Fitbit, the Fitbit Ultra is equally unobtrusive and accurate, although you'll record marginally fewer steps because when you climb stairs those steps aren't counted twice. It's impossible to tell exactly how accurate the calculated calorie burn is without hooking yourself up in a lab, but when we compared it to a fitness measure that tracks skin temperature, heat flux and galvanic skin response as well as activity (to tell when you're hot and sweaty), the Fitbit reported slightly fewer calories used, which is better than erring on the side of generosity.

You can use the Fitbit Ultra to track specific exercise — for example, how far is it to walk home from the station? or how much exercise do I get if I walk up the escalators in the tube station? You do that by pressing on the button until it stays START and pressing again when you're done. You can do the same at night and hook the Fitbit into a soft wristband to track your sleep habits. When you stop moving around, Fitbit assumes you're asleep; when you wriggle about, it tracks you as waking up. It's not perfectly accurate, but it gives less detail but similar measurements to ECG sleep measuring devices like the Zeo — and again, if you can measure something, it's easier to tell if changes like skipping that last cup of coffee in the evening help you sleep better.

To look back at more than a day of step counts, you hook the Fitbit Ultra onto its tiny USB charger — or just walk near the computer it's plugged into, because it uploads data to the Fitbit website wirelessly. If someone else in the family has a Fitbit, the information uploads through any charger you get close to, but they never see your details as it's encrypted on the way to the site. You need to charge the Fitbit about every three weeks — it takes around an hour — and the site tells you when you last uploaded information and the amount of charge in the battery. You also see a battery meter when then Fitbit is on the charger — the battery lasts for three to four weeks and charges in about an hour. The extra stair sensor in the Fitbit Ultra doesn't use up the battery any faster. 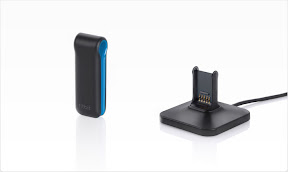 The website tries a little too hard to sell you premium reports; you can actually see a lot of data just by clicking through the historical view, and you get charts and summaries so you can tell if you're getting more or less active (this does require Flash — the mobile version of the site only shows today's figures without the charts). Looking back at the 18 flights of stairs you climbed the day you walked around town and knowing that's the equivalent of the leaning Tower of Pisa gives you a warm glow to look back on, and knowing you'll see your stats can encourage you to get out more when you might otherwise huddle next to a warm laptop. 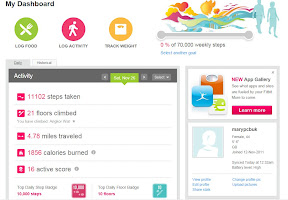 You can also use the website to log specific activities like swimming, yoga, housework or more personal activities that burn calories; by default that's all private and you can choose who to share that with. If you want encouragement you can tweet or Facebook your daily steps, but that's optional too. You can also log measurements like weight, blood pressure, blood glucose and any other statistics you find helpful. 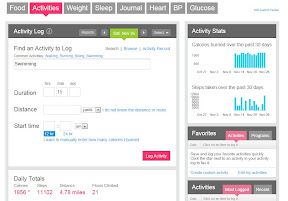 There are links to various tools, including the US version of Microsoft HealthVault (which doesn't work for UK users); more useful is the ability to synchronise information from a connected scale or blood pressure monitor.

The food logging — handy if you want to track your weight and understand how what you eat affects that — has been annoyingly US-centric as well; there are calorie counts for dishes in US restaurants and supermarkets, but previously you've have to add details for UK dishes yourself. Fitbit tells us they "are in the process of adding thousands of UK foods to the database" so this should improve quickly.

Even without a full set of UK services we're delighted to see the Fitbit Ultra in the UK, because it's almost the perfect combination of convenient and encouraging. It won't make you fitter unless you actually get more active, but it can certainly encourage you to be more active. Think of it as turning you into your very own tamagochi — even five flights of stairs is the height of the Hollywood sign and six is the equivalent of the tallest dinosaur and somehow climbing a dinosaur to get to the office makes the steps easier to take while you get in shape. If there was a preset activity for playing Kinect games, this could be the ideal geek exercise gadget. 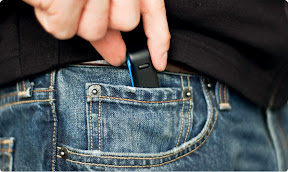 What are best sleep trackers and are they really accurate?

What are the best treadmill desks and do they really work?