For business customers, Microsoft's Windows 10 documentation is an unruly mess

Microsoft has world-class documentation for developers and people who deploy Windows in large organizations. Unfortunately, one group of customers is not being well served.
Written by Ed Bott, Senior Contributing Editor on June 26, 2020 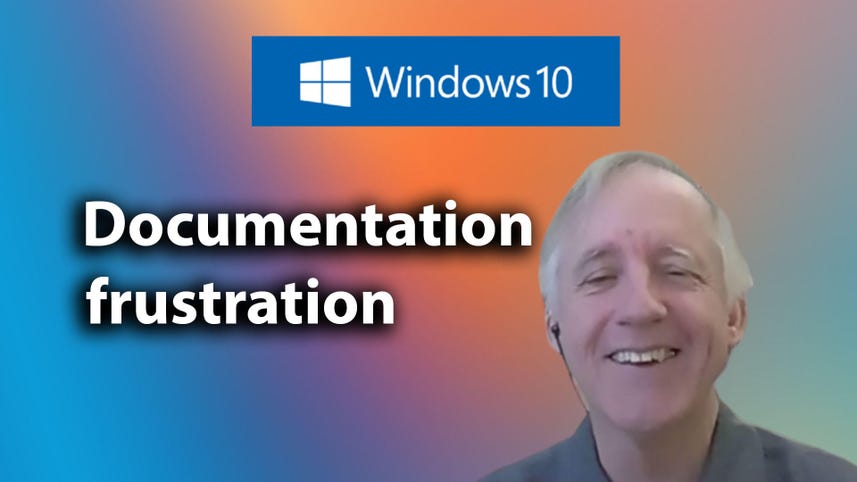 One of the unexpected and unwelcome side effects of Microsoft's push to Windows as a Service is that its documentation has become an unruly mess.

The problem isn't a lack of information. Microsoft's generally been doing a good job of describing high-level changes in Windows and then supplying lots of technical detail about those changes in relatively short order. That's especially true for topics that matter to developers and to people deploying Windows at scale in enterprise shops.

The trouble is finding those details when you need them. Important information is scattered about Microsoft.com like so many puzzle pieces, and it can be a challenge to try to fit those pieces together. For technicians, support specialists, and power users, the move to semi-annual updates is a special challenge. It's practically a full-time job to keep up with the hundreds of changes that arrive with each new version, then do it again six months later for the next feature update.

And just when you think you're all caught up, seemingly minor changes can make you want to pull your hair out.

For a glaring example, look at the Advanced Options page for Windows Update as it appears in the Windows 10 November 2019 Update, version 1909, shown here.

If you visit that page after installing the Windows 10 May 2020 Update, version 2004, you'll see that the two options to defer updates have been removed. Indeed, as my colleague Mary Jo Foley reported, this isn't a bug but rather a feature that Microsoft removed, reportedly "to prevent confusion."

(Spoiler: That decision appears to have caused more confusion than it prevented. But I digress.)

I don't even want to think about how many person-hours were wasted as people who were trying to find this setting stumbled around Microsoft's website in search of an explanation for the change.

(And can we talk about the change itself? The stated explanation sort of justifies removing the deferral option for feature updates, but why remove the option to defer monthly updates by up to 30 days? Why not add the ability to set a target feature update version, as you can in the Group Policy settings. But again, I digress.)

The May 2020 Update was made available to the general public on May 27. The "What's new in Windows 10, version 2004 for IT Pros" article was published at roughly the same time as the feature update was released. But the detail about those missing deferral options wasn't in that document when it was originally published. I went back to the Internet Archive to check how that page changed following its initial publication. The details about this specific change didn't appear until some four weeks later, on June 23, in a quiet update to the original page.

In classic Microsoft fashion, the change was noted as the last item in a bulleted list of "Windows Update for Business enhancements in this release." (I don't know about you, but removing a feature doesn't qualify as an "enhancement" in my book. But once again, I digress.)

Even a well-prepared IT pro who read that document before June 23rd was completely unaware of this change.

In fact, if your job involves keeping up with what's new in Windows 10 so you can support consumers and small businesses, you have to track a ton of information that is not readily accessible from a single hub. Consider all the places you might have to look if you're trying to stay current with the latest Windows 10 release:

That is an awful lot of places to check every week just to make sure you haven't missed something. To make sure I stay up to date, I've created my own Windows 10 information hub with links to those pages and other useful resources. You're welcome to use it.

There's a crying need for something like that. One of the other casualties of the Windows as a Service era is the huge base of third-party how-to content that is published once and then never updated. There are so many web pages out there that contain outdated information from long-obsolete Windows 10 versions, but there's no incentive for the authors of those pages to keep them current. So they turn up in search results and confuse people.

But it really seems like building that hub should be Microsoft's job, not mine. And it shouldn't be that hard to do. Microsoft Docs is built on Github and already powers nearly 80 separate sites. Clicking Windows takes you to a home page with separate Windows Technical Documentation sites for application developers and hardware developers, plus two sites for IT pros, one for Windows 10 and another for Windows Server.

How hard could it be to add one more site and label it "Windows 10 for everyone else"?