The self-driving car is one of the most hotly contested areas of tech development right now, with tech companies like Google (and soon maybe Apple), as well as established car makers like Ford and Volvo each trying to overtake the competition.

Earlier this year Ford said it will triple the size of its autonomous Ford Fusion Hybrid test vehicles, announcing plans to test 30 vehicles on roads in Arizona, California, and Michigan.

Jim McBride: We have roughly ten cars driving right now and we're going to triple that by the end of the year. We're on public roadways -- in fact, there's one out driving right now. It's foggy and rainy here in Dearborn [Michigan] so it's a chance to go out and check out some weather that's not typical sunny weather. 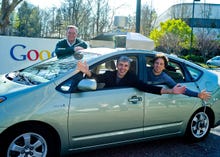 What are the big technical challenges you are facing?

When you do a program like this, which is specifically aimed at what people like to call 'level four' or fully autonomous, there are a large number of scenarios that you have to be able to test for. Part of the challenge is to understand what we don't know. Think through your entire lifetime of driving experiences and I'm sure there are a few bizarre things that have happened. They don't happen very frequently but they do.

How do you build that kind of intelligence in?

It's a difficult question because you can't sit down and write a list of everything you might imagine, because you are going to forget something. You need to make the vehicle generically robust to all sorts of scenarios, but the scenarios that you do anticipate happening a lot, for example people violating red lights at traffic intersections, we can, under controlled conditions, test those very repeatedly. We have a facility near us called Mcity, and it's basically a mock-urban environment where we control the infrastructure. While you and I may only see someone run a red light a few times a year, we can go out there and do it dozens of times just in the morning.

So for that category of things we can do the testing in a controlled environment, pre-planned. We can also do simulation work on data and, aside from that, it's basically getting out on the roads and aggregating a lot of experiences.

How long do you think it will before autonomous vehicles are commonplace?

That's a question that I have a hard time answering because if you have autonomous vehicle technology wrapped up, you can imagine applying that to a whole variety of business cases.

So I think the more important question is, 'when are the underlying technologies going to be available?', and I would say the answer to that is probably four or five years. Then you go from there, deciding how you will employ that technology.

What's it like being driven in an autonomous car?

This is one of the misconceptions that people have. When the car's doing what it's supposed to do, it's very mundane. The car performs like a good human driver would perform. Our project is aimed at fully autonomous, meaning we're not going to ask the driver to have to take responsibility. We don't think it's a fair proposition to have the car drive for hundreds or thousands of miles, then suddenly encounter a situation that's difficult and throw its hands up and say, 'It's your turn'. Our design is predicated on the vehicle always being able to drive itself

Do you think there will be a mix of self-driving and human-driven cars on the roads in the future?

My personal feeling is there will be a mix of cars. We don't want to deny anyone the opportunity to drive. As a matter of fact, our vehicles are dual use, effectively you drive them like they're a normal production car and then, when you want to turn on the autonomous system, it's not very different to turning on your cruise control today. Then, if you want to resume control, you just disengage the system by tapping a button or grabbing the steering wheel.

Do you use a particular model of car for testing?

Right now, our development platform is the Ford Fusion hybrid but the way it's designed is that the software is portable to pretty much any of the vehicles in the fleet. There's a couple of reasons we picked it being a hybrid. It has easy access to the electrical system and that's important when you want to drive a car by wire and when you might want a little extra electrical load for your computers and sensors.

But additionally the Fusion is a mid-level car that has every driver assistance feature on it that you can get in the company. The statement there is that, when we do produce a vehicle that's autonomous, we're not looking to sell to a few elite rich customers, we are trying to democratize it across the fleet as soon as possible, so everyone can enjoy the benefits.

How much computing power do you have to have in the car?

Right now I can tell you what's in the trunk of our car, it's about the equivalent of five decent laptops. At the moment we have a little bit of extra overhead, so that we can try out new code and things like that. I would image as you go to production it would be an embedded hardware unit.

​Google's self-driving cars involved in 11 crashes Google comes clean on the number of accidents its driverless cars have been in over the past six years.

Do the cars always have to be connected to the network to drive?

You can't depend on it [the infrastructure] being there, so you have to have the vehicle be able to stand on its own. We are designing the vehicle to be able to do that but if there are any connections to the infrastructure, we'll exploit them. So if traffic signals want to talk to us, we'll listen but we can't be reliant on them all broadcasting. Another use for the infrastructure is to send data back up to the cloud, so that if you notice any deviations to the map you are driving through you can report those and download updates and things like that.

How big a deal are autonomous cars going to be, really?

I would say it's a paradigm shift that's not terribly dissimilar from [the shift from] horses and carriages going to cars. We're going to have cars driving without you -- without the occupant -- having to do anything. That's a huge paradigm shift and it opens up a whole variety of new business models that weren't previously available.

Can other drivers tell you are driving an autonomous car?

At the moment ours is obvious because we chose not to cut holes in the car to hide the sensors, because we wanted to be flexible about the design. The next cars we are building will be less obvious, the sensors will be a lot more hidden in the body of the vehicle.

I just did 600 miles of driving in California two weeks ago on an interstate and it's got to the point now where I probably only had 10 people in 600 miles even look up from their other driving tasks to pay attention to the fact that we were in an autonomous car, so there's been quite a shift in that regard. Used to be in the old days everyone would gawk, slow down, and take pictures and wonder what the car was. It's not such a big deal any more.

More stories on the future of driving

Join Discussion for: Ford: Self-driving cars are five years away...