University of Michigan students have cooked up six applications for Ford that may indicate what a so-called commute in the cloud may look like. The applications were part of a 12-week course called "Cloud Computing in the Commute."
Written by Larry Dignan, Contributor on May 3, 2010

University of Michigan students have cooked up six applications for Ford that may indicate what a so-called commute in the cloud may look like.

The applications were part of a 12-week course called "Cloud Computing in the Commute." The general idea of the course was to have students define their ideas about in-car connectivity.

For Ford, in-car entertainment is a big priority and a differentiator for its new Fiesta. As noted in our previous Q&A with Ford's K. Venkatesh Prasad, head of infotronics research and the advanced engineering team at the automaker, the company is aiming to roll out similar programs at other universities. The aim: Create an in-car entertainment ecosystem and harness brainpower.

These experimental apps all revolved combining social networks, geolocation data and vehicle specifics to be useful. For the class, Ford initiated the course, provided expertise, brought in partner support from Microsoft and Intel and gave developers a framework to build the apps. The effort is part of what Ford calls the American Journey 2.0, which aims to collaborate with students.

The winning app is dubbed Caravan Track and will be tested in a Ford Fiesta headed from Ann Arbor to Maker Faire, a Silicon Valley ideas festival. The road trip will consist of two Fiestas, one loaded with student apps and another with Ford engineers, who will also have tests.

T.J. Giuli, a research engineer with the infotronics team in Ford Research & Advanced Engineering, made the following points in an interview:

And here's the rundown of the apps:

Caravan Track was the winning app. The app allows clusters of vehicles traveling together to track each other. Users identify a route on a Web site and can then track each vehicle down to the fuel level and speed as well as road conditions and hazards. 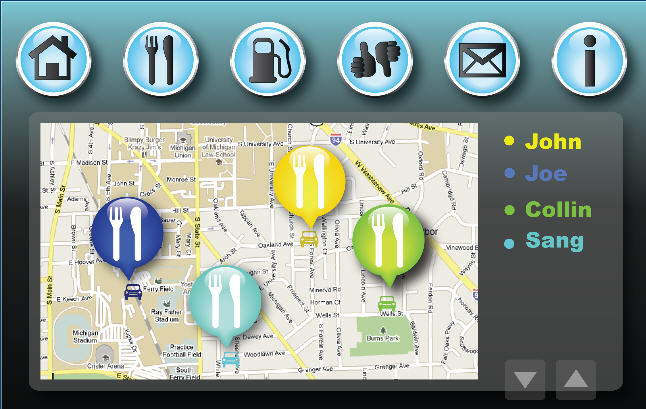 The GreenRide Challenge finds and matches potential carpool passengers via Facebook. Points are awarded for ride sharing. If this app went to production, Giuli said there would need to be more work on limiting friends and networks for safety. 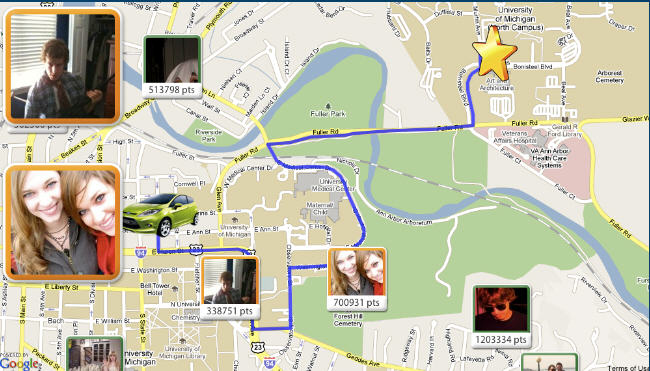 NostraMap collects data about road and traffic conditions and gives drivers a heads-up about accidents, construction and other hazards.

Points-of-Interest uses a recommendation system to point drivers toward locations and businesses that match their interests.