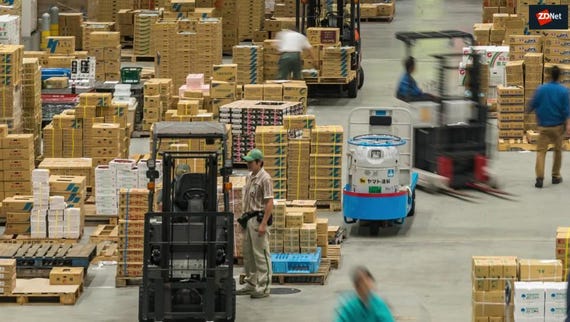 Fork off: This ubiquitous machine is about to turn into a robot
Watch Now

The adoption of game-changing technologies usually comes to niche sectors that aren't the most visible before hitting the mainstream, and robotics is no different. So while self-driving cars grab headlines, for a more realistic market adoption forecast of autonomous mobile technologies you might want to look at forklifts.

Automation has already come to forklifts in a big way. According to Robotics Business Review, around 5,000 automated fork-trucks were shipped in 2019, generating over $700m in revenues globally. The machines come in a number of varieties, from pallet trucks that haul loads from one location in a warehouse to another to what's called very narrow aisle vehicles (VNAs).

A company called Third Wave Automation just closed $15 million to bring "shared autonomy" to the forklift space. The premise is that warehouses are fast-moving environments where human operators make mistakes. For example, pallets are easily misplaced or positioned in a way that requires they be moved frequently. Third Wave systems identify the situation, make a decision about how much of a correction must be made, and are trained to confirm with the forklift operator if the correction is in any way unsure.

The premise is that the robot interacts with the human operator, multiplying the potential of each. When the operator intervenes, the Third Wave systems learn from the interaction and can autonomously handle similar situations in the future.

"The forklift is this fantastic machine, has been in heavy use for a century already, and has become the core component of a well-functioning warehouse — making it a great target for automation," explains Arshan Poursohi, CEO and Co-Founder of Third Wave. "The products that we could find already available automated only a fraction of the utility of a forklift; and even in that fraction, they imposed limitations that our technologies could solve."

Forklifts seemed like a great target for automation for another reason as well. The supply chain and logistics industries, both of which utilize forklifts, have been steadily growing with demands related to the growth of e-commerce. COVID-19 has only accelerated the conversation around automation in the supply chain.