Autistic spectrum disorders, or ASDs, impose huge costs, both human and economic, on sufferers, their families, and the community.

The human toll, in terms of care and impaired relationships, is almost impossible to quantify. Looking at the US alone, the economic expenditure last year was estimated at about $268bn.

The exact causes of the pathology are still unknown, and there is no medical solution except for early and intensive education, which can at least reduce the symptoms.

"However, families often can't access or afford tailored education for their autistic children, due to the inadequacy of state funding, and the lack of private instructors and trained people," Turkish computer scientist and edtech entrepreneur Zafer Elcik tells ZDNet.

"Also, the average attention span of children with autism is around five to 15 minutes, which makes providing them with education a very difficult and painful process."

He knows what he's talking about: his younger brother has been diagnosed with ASD, and it was the desire to help him which ultimately led Elcik to launch Otsimo, a startup providing free games for autistic children, with the goal of addressing the problem of reduced attention spans through the use of gamification techniques.

"We started this business one year and a half ago. I realized my brother was interested in my smartphone, and I bought him an iPad. But I saw there were no specific games for autism. There are a few apps on the market, but they're very expensive at about $250," Elcik says.

Together with co-founder Sercan Değirmenci, they set about creating an open-source platform composed of two apps, one for the children and one for the family. At the moment, the child component contains 15 games on several topics, ranging from those encouraging social interaction to learning the alphabet.

The games, which have been developed with the help of educators, psychologists, and the largest autism foundation in Turkey, are very simple to avoid unnecessary distractions for the user.

"As these children have a sensory overload problem, we avoid, for instance, using too many colors in each game," Elcik says.

"Also, the games are designed to reward positive behavior, rather than stressing the mistakes. If the person playing makes too many errors, for instance, the program automatically lowers the difficulty level."

The app is designed for children from two to eight years of age, in the early phase of autism, to help them go to school and get a regular education. 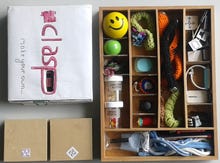 For each gaming session, the app collects data and uses machine-learning techniques to fine-tune and improve the performance.

According to the startup, as the children play, their attention span undergoes a threefold increase, rising to between 45 and 50 minutes.

The other app allows the family to track the child's behavior and receive detailed monthly reports about improvements. Parents can also remotely control the child application and have full access to the educational material.

From the commercial point of view, Otsimo has adopted a freemium model. The games are completely free to play: reports and optimization features, combining the use of data mining and machine learning, come with a $15 monthly subscription system.

"We also sell the software to schools, charging $15 per student. It's enough for us. We could also share the anonymized data with researchers and make some revenue from there. We're not focusing on making money, anyway. We're focused on reaching as many students as possible. This is our KPI," Elcik says.

So far, the Otsimo app, which is available both in Turkish and in English, has some 1,000 active users in Turkey and a few dozen B2B customers.

To bootstrap, the startup has taken advantage of a $25,000 grant from the government, followed by a $50,000 seed investment from private investors belonging to the Galata Business Angels association.

The plan is now to expand the number of games available, with up to four new games created every month, and focus on the US market.

While the exact number is unknown, more than 3.5 million Americans and more than 604,000 in the UK are estimated to have autism, according to a 2014 study. Finding customers, unfortunately, should not be an issue.

Join Discussion for: Free, open source: Games that use machine...