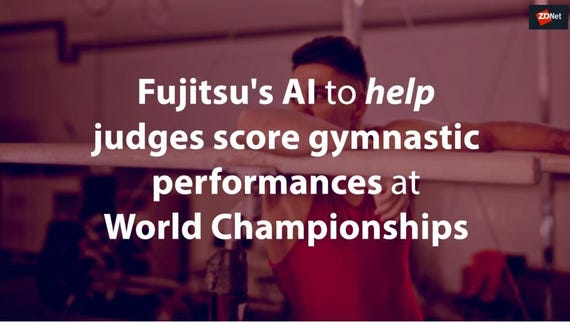 Fujitsu has developed artificial intelligence (AI) and 3D sensor technology that will be used at the Artistic Gymnastics World Championships in Stuttgart, Germany to assist judges with their scoring of gymnastic performances.

The technology, called the Judging Support System, utilises AI and 3D sensors to capture each gymnast's movement before analysing it as numerical data.

According to Fujitsu, the technology achieves this by offering a three-dimensional digital view of the performed elements, with a variety of selections for angle measurements, all of which are designed to help judges make decisions.

The support system will be used by the jury at the event alongside the Instant Replay and Control System (IRCOS), a video replay system that has been used in artistic gymnastics competition since the 2005 World Championships.

It is the first time the system will be used officially for confirming difficulty scores at an International Gymnastics Federation (FIG) competition, with the tool to be used for four apparatus. Prior to this, the system had undergone successful testing at the Tokyo All-Around World Cup and the Junior World Championships in Gyor, Hungary, earlier this year.

The FIG and Fujitsu began work on this technology in 2017, with the aim of setting up a real-time judging support system that is fair and accurate.

"The people we must always have in mind are the gymnasts. They dedicate their youth to this sport, which gives them dreams and sees them flourish. We cannot accept that all those years of hard effort and all those dreams can be destroyed by a single judging error. Scoring controversies must become a thing of the past, and the technology that Fujitsu has been developing will reinforce trust in judgement," FIG president Morinari Watanabe said.

If the technology is well received at the World Championships, Fujitsu and FIG have said they plan to expand the tool's application to the remaining six apparatus in Artistic Gymnastics.

The FIG also sees potential for the tool to be used beyond judging and envisions use cases in education, coaching, and training. The data provided might help to enhance gymnasts' movements or correct body posture, and thus aid in lowering the risk of injuries, FIG said.

The Artistic Gymnastics World Championships starts tomorrow and will run until October 13.

Kookaburra takes a swing at creating a smart cricket ball

Howzat? A ball that can provide real-time feedback on speed and revolutions could be soon debuting on wickets the world over.

The organisation has turned to SAS for help with tackling data.

Gone are the days of coaches receiving a rushed print-out on how their players are performing; now the NHL is looking at how to track the puck and the players in real-time.

Sacramento Kings: Using 5G, VR, and blockchain for the NBA arena of the future

Not only are the Sacramento Kings working with Verizon on 5G and VR, the NBA team is also looking to a future of blockchain and cryptocurrency across smart stadium and STEM education initiatives.

Thanks to AI, athletes can essentially monitor their own performance and program.