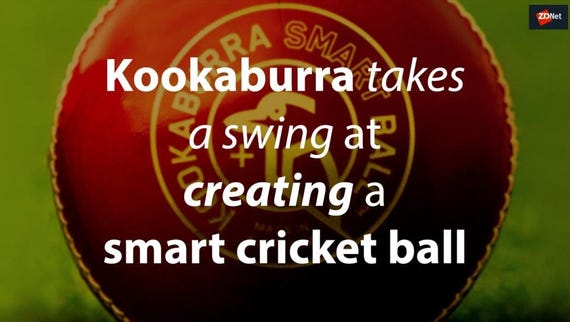 Australian sports equipment company Kookaburra is developing a "smart" cricket ball, one embedded with a microchip to provide real-time feedback.

The SmartBall has been in development with technology partner SportCor for the past two years.

According to Kookaburra, the new ball will change the way cricket is coached, played, officiated, and experienced.

The chip inside the core transmits information from the ball back to a phone or tablet app.

The company said it feels and moves the same way as a regular Kookaburra cricket ball, but collects and communicates instant statistical data on revolutions, as well as speed at release, pre-bounce, and post-bounce from the embedded microlight chip, at different stages of its journey from the hand of a bowler.

A bowler will be able to release a delivery, and then immediately look to his or her smartwatch and check the speed or degree of turn.

"Never before have we been so close to the action, nor have players and coaches had such insight to performance," the company said. "This gives us new and improved insights into the delivery that has never been seen before."

Kookaburra is responsible for the white and pink balls already used globally, and expects the new ball will have application in Test cricket and top T20 leagues.

"There is not enough testing done yet for it go straight into a test match tomorrow, however within the next year we hope to be in a position to offer it up to the ICC and its member boards as a ball that could be tested and used at international level. It's likely we will see it trialled in a major Twenty20 league within the year," the company said.

Currently, there is one speed and revolution figure that is used when a ball is bowled -- and that comes from a fixed stationary radar that sees a speed reading recorded at the same point regardless of the height of the bowler or their delivery plane.

"This has limits, most obviously it results in a speed bias to the bowler with the lower release point (either through height or action)," Kookaburra explained. "The SmartBall allows the ball to talk."

The difference with the SmartBall, the company continued, is that it's now relaying speed and revolutions objectively and not from another instrument trying to capture the ball from one viewpoint.

"Kookaburra has been at the forefront of innovation in cricket, from the first ever white balls used under lights in World Series Cricket, through to the pink balls now used for day/night tests," Kookaburra managing director Brett Elliot said.

"The logical next step is to combine the data and analytics side of cricket that is becoming so critical to players, coaches and fans, with our traditional style of hand-making cricket balls."