The announcement comes with news that the company is expanding into defense.

The latest funding round adds to $28.5 million in funding last June. In a crowded drone market, it's an indication that Airobotics has an edge, at least in the eyes of investors.

The secret sauce is a combination of a dead-simple user interface, a business model based on selling services rather than hardware, and a focus on industries that have exorbitant infrastructure and inspection costs.

Take gas refining. In order to keep refineries running, gas companies aggressively inspect and monitor thousands of components distributed over several acres, along with pipelines that can stretch miles. Previously, all that was done with humans. The resulting process was slow, error-prone, dangerous, and expensive. 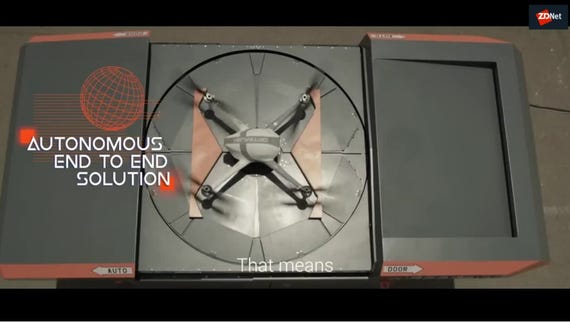 Airobotics' pitch is simple. They bring in and set up a platform that includes an autonomous drone, an automatically operated air base, and integrated software. Once programmed, missions can be launched with the click of a button.

The drones are fully autonomous. That means a selected mission can be run with precision over and over again, reducing errors and lowering high costs associated with hiring specialized pilots.

The drones collect data that can be used for mapping, inspection, security, and emergency response. Because Airobotics is selling the service, not the hardware, it's setting itself up for high-value recurring revenue.

That's been music to investors' ears. The latest $32 million round was led by BlueRun Ventures China, as well as Microsoft Ventures, and OurCrowd.com, along with an unnamed strategic investor.

With the fundraising, the company is announcing a new division of Homeland Security and Defense, as well as something it's calling the "Airobotics Safe Cities" initiative, which uses fully automated drones to perform emergency applications in cities.

The emergency response initiative sounds great -- with disaster stacked on disaster this year, drones are playing an important role in search and rescue and critical monitoring of facilities. No doubt they'll soon be delivering emergency medicine, aid, and supplies.

But I suspect the initiative was designed to provide some publicity cover as the company moves into defense. Drones used in security, border protection, and warfare are controversial, raising all kinds of ethical and legal issues. Defense drones in use today are piloted by people working in remote operating facilities.

But Airobotics' drones are completely autonomous, and that's bound to add kindling to the raging debate over the deployment of autonomous systems used in warfare or intelligence gathering. Airobotics hasn't stated how its systems might be used in defense, or by what state actors, but its native Israel seems a likely candidate.

Currently, Airobotics can only fly autonomously in Israel, where it has special licensing from the Civil Aviation Authority of Israel (CAAI). It was the first company in the world to be granted that authorization.

China is poised to dominate robotics markets sooner than expected

The numbers are staggering, but the diversity of the development is the real surprise

Humans are social creatures. Can robots learn to politely engage?