Samsung firmly establishes its product identity and shows itself as the best hardware maker in smartphones with the Infinity Display, polished metal work, and glossy Gorilla Glass finish.
Written by Cho Mu-Hyun, Contributing Writer on April 1, 2017

Is it a "work of art" as Samsung described it? Of course not. The Galaxy S8 is no Michelangelo. Samsung is also saying it's the best design in consumer electronics, and although we shouldn't take the Korean tech giant's hyperbole too literally, I for one agree.

The unveiling and design of the Galaxy S8, in a lot of ways, is reminiscent of the company's launch of the Galaxy S3 five years ago. It was "original" in the sense that it was really Samsung's own smartphone and the first to embrace a larger screen.

While the S4 and S5 designs felt more like S3 derivatives rather than an evolution, Samsung's Galaxy S8 is definitely a step forward from its predecessors the S7 Edge and S6 Edge.

Embracing the screen with Infinity Display

The Galaxy S8 and S8 Plus' dual-edged, "wraparound" display dominates the phone. It's eye-catching and simply beautiful. The screen, now extended top to bottom with the company logo gone, takes up 83 percent of the phone's front. It feels like it's even more than that, but I'll take Samsung's word for it.

Even from a brief glance, the side edges curve inwards more than the S7. This is likely in response to the edges protruding out too much, sometimes being inadvertently touched when using the main screen.

The 18.5:9 ratio elongated screen and edges really come into play when streaming videos. I played some pre-installed demos, and the screen "encircles" the clip to give the impression that it is wider than it is. The wraparound display achieves more than just looking beautiful here -- it's now even more immersive.

Traces of iPhone-like side designs, which were raised for the launch of the S6, are gone. Company executives vowed to make the edge design and the metal work a Samsung signature going forward. In terms of design, no other phone comes into mind; the Infinity Display really lends the S8 a made-by-Samsung feel.

Samsung continues the glossy glass-metal finish that it started with the S6. The colors in the S8 seem more settled as compared to sometimes gaudy feeling I got from the S6 and S7.

It is more solemn than flashy, and the glass absorbs light well to make it reflect less, forming silhouettes rather than mirror images. It's kind of like car metal, and makes the S8 and S8 Plus look like a Ferrari among phones, suggestive of the $900 price tag.

Despite the big screen and pricey-looking metal and glass finish, the S8 is very light and sits in the hand surprisingly well. The jet-black cover variation gives the feel of holding onto just a display rather than an entire phone. And the company has really stepped-up in cutting the Gorilla Glass, giving it mastery over its Android rivals.

What is interesting about Bixby, more than being a virtual assistant, is that it has a dedicated physical button on the side.

It's ironic because physical buttons seem to on their way out, as demonstrated by Samsung removing the home button. It is arguably the first time a physical button, besides on/off, volume, or camera is being introduced. Why?

The Bixby button is right below the volume button on the left side, so your index finger will be bound to touch it now and then. We are so used to the button configuration of the smartphone that putting a fingerprint sensor on the S8 will definitely annoy some. Basically, Samsung wants Bixby to become an intuitive press habit of yours. But whether it will work remains to be seen.

And there is a bigger consideration here. The physical button, I think, reflects Samsung's brainstorming efforts on how to leverage hardware to make the virtual assistant more accessible. Remember, Samsung announced plans to deploy Bixby in its other consumer electronics, such as home appliances, and there will be different ergonomic considerations for the best way to deploy the virtual assistant depending on device-type.

Samsung told ZDNet that Bixby is a "baby-step," but added that the addition of the physical button is also a sign of confidence that the virtual assistant platform will become bigger. Bixby's growth will be an interesting test to see how hardware could cater or change to adapt to it.

At least for the demo, the iris and face scanning is super fast, likely due to the 10-nanometer processing beasts Exynos 9 and Snapdragon 835.

Users can register their face via the camera app. Even with a brief flash, the S8 recognized my face and unlocked the phone immediately. Samsung says the big plus from facial recognition will bolster security for those who don't password protect their phones (guilty).

I sincerely hope, however, that Samsung will find a way to put the fingerprint sensor on the screen, which for the S8 is now on the back next to the camera. This decision seems a compromise due to current technological limitations rather than a conscious choice based on practicality. Now that the home button is virtual, it'd just be cooler and easier to have everything on the screen as touching is far more intuitive than pressing.

Specs are part of what wins consumers over, especially for tech aficionados and experts. But for the mass consumers, I think the key factor is emotional appeal based on appearance, and this is where design proves important. The S8 and S8 Plus have hit the nail on the head in this regard.

This focus on design is nothing new for Samsung. The Gear S3 Classic and Gear S3 Frontier are good recent examples, as is the new Frame TV, which changes the TV in to a picture frame.

But now that phone specifications are nearly neck-and-neck among the top vendors, differentiation is hard; it's only the design factor where makers can put themselves ahead of the pack. Design is everything now. Samsung's advantage in displays seems clear and it should continue to focus on that going forward.

The natural next step for the Note 8, or the S9, will be all-screen device. I can already hear Samsung's presentation announcement next year of a screen that takes up 90 percent of the device. It will be interesting to see if the company will make an edge top to button, but due to usability considerations, this will not be an easy decision.

The company's next evolution from the wraparound display will be an interesting experiment. For now at least, it seems there's no need for a foldable phone. 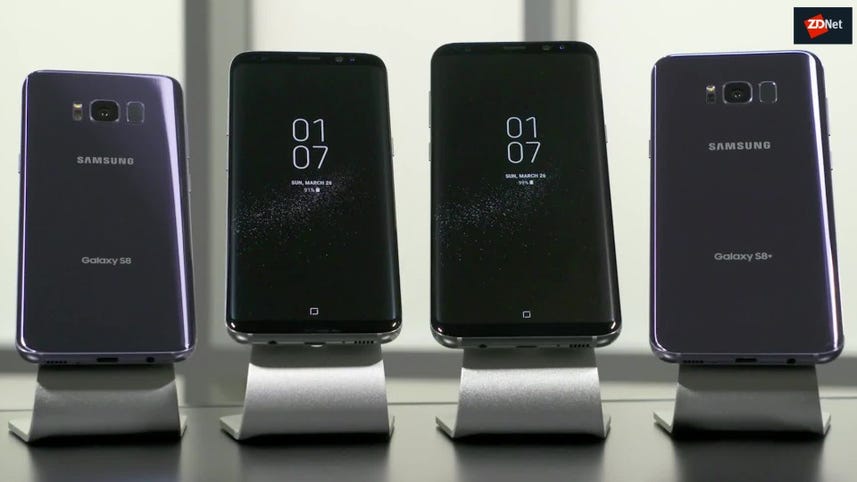