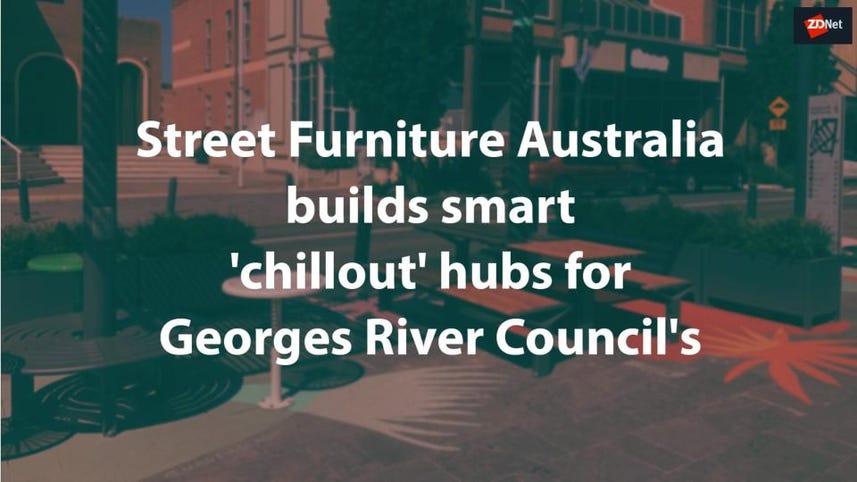 The newly launched public spaces that have been dubbed as "chillout hubs" in Sydney's southern suburbs of Kogarah, Mortadale, and Hurstville can easily be mistaken as regular local council spaces, featuring bench seating, tables, and shelter.

However, under the hood, these chillout hubs feature solar power, free Wi-Fi, and charging ports.

Several sensors have also been installed in these areas, including bin sensors to help determine fill levels and frequency; water fountain sensors to track use and monitor leaks and faults; a remote power monitoring system to proactively capture faults, consumption, and usage; and climate sensors to measure the general weather conditions of the area.

In addition, when connected to Wi-Fi, MAC addresses are captured to understand behavioural patterns and dwell time along with a count of users.

"We know that as our cities densify, it's really important that we make and create really fantastic public spaces for people to enjoy," she told ZDNet.

"The idea behind these chillout hubs over any other particular smart design was that we saw the benefit for the community. They're also relatively low risk for council, as some smart city projects can be huge. But this is quite contained, and it allows us to see whether it's worthwhile for the community."

GRC developed the smart hubs in partnership with the University of New South Wales (UNSW) and Street Furniture Australia, as part of a federal government's Smart Cities and Suburbs Program, which saw the three partners collectively receive just over AU$879,000 in grant funding for the project.

With the hubs now officially "live", UNSW has developed a prototype dashboard to collect all the data that will be shared with GRC.

Looking ahead, Barnes hopes to be able to ingest the collected data into GRC's asset management system.

"[Data] is something council is grappling with because as more sensors are introduced to the environment -- and not just in these particular products. It's how do we gather and decipher that information so it's useful?

"It'll eventually be able to connect with our asset management system, which will allow us to be proactive on fixing things, rather than wait on the community to report something is wrong. It will allow us to understand asset lifecycles, so we can prepare for maintenance, and if there's a rollout of smart bins, we can negotiate contracts based on data, rather than routing systems."