With the newly announced Vector Linux 7.0 Light you not only get to a lightweight Linux distribution, you get to choose how light you want it. The distribution ISO includes four different configurations, comprising not only the desktop manager itself but also the number and sophistication of utilities and applications which are included:

- JWM, the "Barebones" option, which gets you up and running with an absolute minimum system. This is probably of interest to those who have very old hardware (although anyone with a system old enough to need this would probably already know about Puppy Linux or one of the other established distributions specifically targeted for this), or those who really want to start from a bare minimum and build up a custom system exactly the way they want it.

- IceWM, the "Light" option, with a more complete window manager (but still not exactly what I would call a "desktop manager") and a minimal set of utilites. This one might still be a good starting point for someone who wanted to build their own customized system, but wanted a bit more complete base to start from.

- Openbox, the "Medium" option, with a popular lightweight desktop manager, a full set of utilities and some basic applications. I would consider this one to be the lower level of the "I want a complete and ready-to-use system, with a minimum of bells, whistles and decorations and I want it to stay out of my way and let me get on with my work".

- LXDE, the "Full" option, with the well-known and very popular desktop manager, and pretty much the equivalent of a lot of other LXDE distributions. Still "lightweight", compared to Gnome and KDE, but certainly a lot more comfortable out of the box than the other options. In fact, if you choose this option you also get the Medium option as well, so you can switch back to plain Openbox if you want/need to or are just curious.

I have installed Vector Light on a couple of my netbooks - the Samsung N150 Plus (the same one that Linpus refused to boot on, by the way) and the Samsung NF310 - as these seem to be very typical of the target for this distribution. The result looks like this: 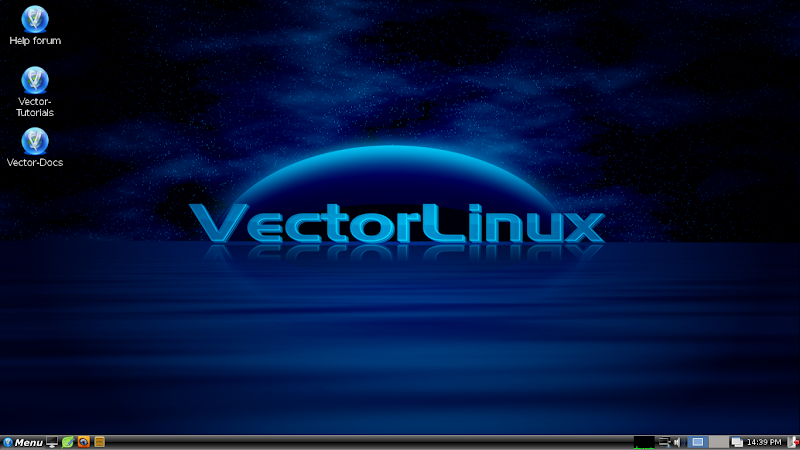 Before I go into too much of a description of the installation and operation, I want to say that I like Vector Linux. I find it refreshing and different from the current crop of Debian/Ubuntu clones and derivatives. Best of all though, I like the fact that there are a quite a few dedicated, hard-working individuals behind this distribution, and besides the effort they put into the distribution itself, they always seem to be happy to help people who come to the Vector Forums with questions or problems. This, to me, is a lot of what Linux has been about over the years, and it is still what distinguishes the best distributions today.

The Vector installer is, well, showing its age, as is mentioned in their release notes. If you remember the text-only installers, or the early curses installers used by Slackware and Debian, you probably won't have much trouble with this one. But if you haven't seen anything like that, and you go in expecting one of the slick GUI installers that most of the current distributions have today, you are in for a surprise. The difference goes a lot deeper than the text/GUI interface, though. The installer asks questions that you probably require a non-trivial Linux knowledge to answer. That is not to say that inexperienced Linux users should steer clear of Vector Linux, it just means that you should be prepared to spend a bit of time on the installation, try to make sure that you understand what it is asking and what it is doing, and be prepared to ask for help when necessary.

As I said, I have installed the LXDE version on my netbooks. When the installation is complete, you can choose between LXDE and Openbox via the option on the login screen. The utilities and applications installed are mostly typical of LXDE systems - Firefox, Abiword, Gnumeric, gpicview, ePDFviewer and such - but there are a few exceptions, such as including GIMP for image editing, and the Shotwell photo manager.

A couple of other quick comments... Didn't the full Vector Linux 7.0 release include a choice between GRUB and LILO for the bootloader? I think I remember that. Anyway, with this Light release the only choice you have is LILO or nothing. For 98% of the users this will not be a problem, a bootloader is a bootloader as long as it works, and LILO certainly does work. But for me it is a minor inconvenience because I have so many other distributions installed which all use GRUB, and getting those to play nicely together is more trouble than I am willing to go to right now. So I installed without a bootloader, and then added Vector to my existing GRUB multiboot manually. Also, when I looked at the full Vector Linux 7.0 release some time ago, there was still a problem with support for the WiFi adapters in some of my netbooks. I was pleased to see that this seems to be resolved in this release. Now I just have to figure out how to get the Wicd network manager to recognize and configure my interfaces...

Overall I would say that if you are looking for a good hobbyist Linux distribution, where you can really get involved, see how things work, configure and customize your own system, and generally learn a lot about Linux, Vector Linux 7.0 Light could be a very good choice.