Google is to use hundreds of Project Loon balloons to make fast internet access available across Indonesia, which remains one of the least connected nations in southeast Asia.

The technology giant will team up with local mobile network operators to beam high-speed LTE connections to more than 100 million people who currently lack network access.

Google announced the Loon launch at a press conference in Mountain View, California, on Wednesday alongside executives from Indonesia mobile network operators Indosat, Telkomsel, and XL Axiata. The four have signed a memorandum of understanding to begin testing Project Loon airborne base station technology over Indonesia in 2016.

Estimates of Indonesia's internet penetration vary. Indonesia is home to 256 million people spread across more than 17,000 islands and official calculations are that roughly one third of the population are connected. However, internetsociety.org estimates Indonesia has 15.8 percent internet user penetration, ranking it 135th in the world, ahead of many nations in Africa and parts of Asia. 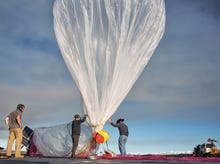 Mobile broadband penetration in Indonesia is currently 24.2 percent while just 1.3 percent of the population has a fixed line connection, according to internetsociety.org figures.

The Indonesian launch marks Project Loon's fourth testbed for the technology, following trials in Australia, Brazil, and New Zealand, which have run in partnership with local carriers since 2013. It pushes forward Google's ambition to connect around four billion people who don't have access to the internet today.

Rather than acquiring its own spectrum for Project Loon, Google has opted to partner with local telcos to utilise theirs. The rationale for air balloons is that frequency bands can offer broader coverage from the sky -- about 18 to 27 km above ground -- than terrestrial towers. Traffic from the balloon network is ultimately relayed to telco partner base stations.

Signals will be transmitted to Loon balloons from areas that are connected on the ground and are then bounced across the aerial network back to areas of land without coverage.

"High in the sky, we can help overcome the difficulties of spreading equipment across an archipelago of 17,000 islands of jungles and mountains, providing connectivity to even the most remote islands," said Cassidy.

Within five years, Google hopes to deliver LTE-speed connections to more than 100 million people in Indonesia currently without internet access.

Google took a different tack for India where it recently announced plans to provide high-speed public wifi in 400 train stations across the nation.