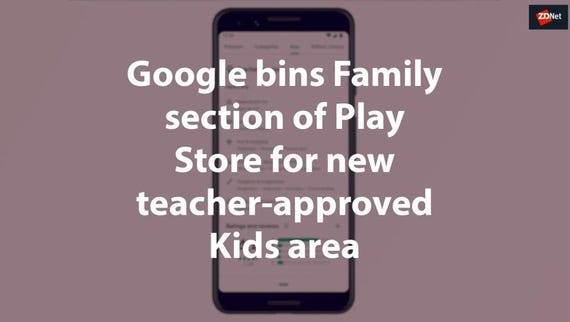 Google said on Wednesday it would remove the Family section and related badges from its Play app store, replacing it with a new teacher-approved Kids area.

The search giant said it decided to bring this plan forward due to successful testing and children spending more time at home as a result of the coronavirus pandemic sweeping the planet.

In place of the Family badge, apps will now have a "Teacher approved" badge after they are rated against a scorecard of "age-appropriateness, quality of experience, enrichment, and delight," Google said. App listings will contain the reasoning for the rating.

"Teachers are working hard to review apps as quickly as possible, but it will take time to review all apps, so we appreciate your patience," the search giant said.

Apps that pass muster will be placed in a new Kids tab on the Play Store, with the tab to hit the United States in the coming days and be rolled out globally in the coming months, Google said. Apps will need to be part of Google's Designed for Families program before they can be reviewed by teachers.

Apps that were previously in the Family section will not be placed in the new tab.

Google launched its Family section in June 2015, and introduced Family Library a year after.

Family Library allows for up to six people to share purchases including apps, games, movies, television shows, and books for free, and will not be impacted by the removal of the Family section.