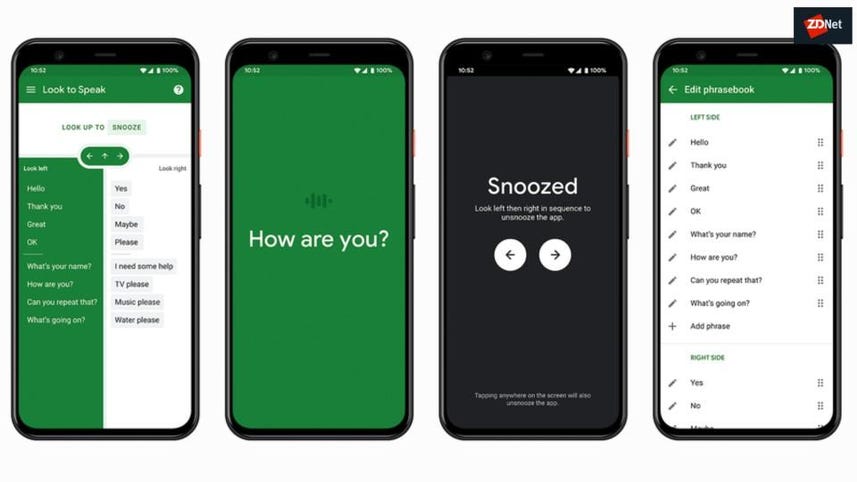 Google, together with speech and language therapist Richard Cave, has developed an experimental Android app designed to provide people living with speech and motor impairments, particularly those who are non-verbal and require communication assistance, with a way to express themselves.

Look to Speak uses machine learning and eye gaze technology that lets people use their eyes to look left, right, or up to select from a list of phrases for their phone to speak out loud.  The app can also be used to snooze the screen and edit a user's phrase book.

Some of the phrases include: Hello, thank you, yes, and no.

"As mobile devices become more ubiquitous and powerful, with technologies like machine learning built right into them, I've thought about the ways phones can work alongside assistive technologies. Together, these tools can open up new possibilities -- especially for people around the world who might now have access to this technology for the very first time," Cave wrote in a blog post.

Cave believes Look to Speak could be used as an extension to existing eye gazing technology.

"We're not replacing all of this kind of heavy-duty communication aid stuff because there's a lot of functionality in there. Look to Speak is for those important short messages where the other communication device can't go," he said.

Elsewhere within Google, work is being carried out to help users overcome the challenge of accessing payment information and passwords stored in their Google Account when using Chrome in situations where sync is not turned on.

Chrome product manager Sabine Borsay said in a blog post that "over the coming weeks and months" Google would ensure payments and password management are available to all signed-in users, syncing or not.

Borsay outlined Chrome on Android would allow users when they sign in to Google services, such as Gmail, to sign in to Chrome using their Google Accounts with a single tap, even when using sync, thereby avoiding the need to re-enter credentials.

Using this new sign-in method, according to Borsay, will allow users to autofill payment methods stored in their Google Account, as well as save a new credit card to the account to be used across all devices.

"We've heard your feedback for more flexibility when it comes to having access to passwords saved to your Google Account. Over the next couple of months, accessing and managing your passwords safely across your devices will become even easier," Borsay said.

"This can all be done simply by signing in to your Google Account, regardless of whether sync is enabled. You'll be able to autofill passwords on sites that you previously saved to your account, and when you save a new password, Chrome will let you choose where you want to save it -- on the device or in your Google Account. If you choose your account, you can access it on all your devices."

A soft wearable device to simulate the sense of touch and funding from the US Department of Defense to progress work on using VR to ease nerve-related pain following spinal cord injury.

A team of neuroscientists has demonstrated that an algorithm could be trained to recognise the mental preparation for the act of writing letters, and that it could be twice as effective as existing technologies.

Mind reading made possible: How people who can't talk can now communicate by thought alone

A new brain-computer interface is allowing people in a completely locked-in state to communicate with others.

Intel outlined an update to Stephen Hawking's communications platform and plans to provide a toolkit that can be used to advance technologies that could help those affected by motor neuron disorders.