Sync is the new black. Everyone and their dog now has a sync service as part of their platform: Apple's iCloud, Microsoft's SkyDrive (which we review here), Ubuntu's Ubuntu ONE, and Dropbox nearly everywhere.
Written by First Take , Previews blog log-in on April 28, 2012

Sync is the new black. Everyone and their dog now has a sync service as part of their platform: Apple's iCloud, Microsoft's SkyDrive (which we review here), Ubuntu's Ubuntu ONE, and Dropbox nearly everywhere. Now Google has finally released its much-anticipated Google Drive — joining a crowded marketplace. Is it different enough and compelling enough, or is it another Google Wave in the making — or is it something else altogether?

The good news for Google is that it's built on top of an existing popular service, Google Docs. In fact, if you've got an Android device and had the Google Docs application installed, it's already been updated and replaced by Google Drive. Like Microsoft with SkyDrive, Google has realised that people need more than a place to store and synchronise files, they also need somewhere they can work with files when they don't have access to their regular PC. It also gives Google a platform for third parties to build additional services — and you'll find a library of tools in the Chrome Web Store that take advantage of the service. There's also a public API, like Microsoft's SkyDrive API, so anyone can build Google Drive support into their applications.

Once your Google Docs account has been upgraded to Google Drive, you get 5GB of online storage, and a new user interface for your cloud documents. The web isn't all, and Google Drive installs a sync-client on PCs and phones (Android only at this point, with an iOS application waiting for approval, but no sign of tools for Windows Phone or BlackBerry). Installation is quick and easy, with Google's web-based installer downloading the latest version and keeping it up to date.

Once the sync client has been installed, it creates a local Google Drive folder, and adds it to your PC's favourites. Any files you'd already stored in Google Docs are automatically synchronised — so if you've used Google's Office sync tools in the past you may end up with duplicate copies of documents. Files created in Google Docs get their own file type — .gdoc and .gsheet, though these aren't true local copies of the files. Instead they're links that open files in Google Docs, making them useless when you're offline. You can choose which Google Drive folders are synchronised to which PC, though only from the client application. 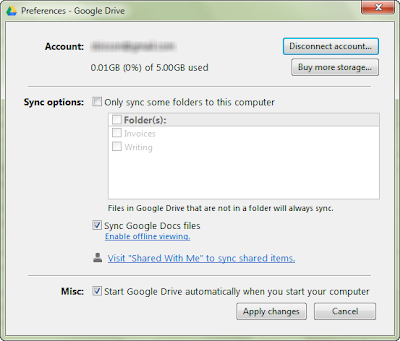 Files saved in the Google Drive folder on your PC are automatically uploaded to the service, where you can choose to edit or view them. Google's file viewer handles more application formats than much of the competition, but there's one big flaw. If you want to edit an Office file, you'll need to export it from the viewer to a Google Docs file for editing, a process that means losing some document formatting and much of the metadata. It also means you'll need to export the file back to Office formats before you can use it locally. That means you'll need to create a new file for any exports — there's no direct link between the exported, edited file and the original. Although not every file can be edited straight away, a built-in OCR service means you can at least cut content and paste it into a new document. There's an option to automatically convert uploaded files into Google Docs formats, including OCR'd content — although it's limited to files up to 2MB in size. 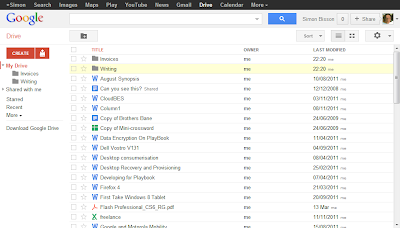 It's the automatic aspect of Google Drive that may mean businesses ban it from corporate PCs (as well as blocking the web site). Data saved in the Google Drive folder is uploaded from any PC with a user account. If that data isn't protected using tools like Microsoft's information rights management tools, or protected by a data loss prevention system, it's very easy for users to use it to bypass firewalls and upload sensitive data to sites and services like this — and inadvertently leak confidential or sensitive information that's covered by various regulations. If you're going to let your users use tools like Google Drive, you'll need to consider just how you manage your data.

While the initial 5GB quota for storage should be sufficient for most use cases, there is the option to add additional storage for a fee. Google's storage charges are higher than its competition, starting at $2.49 a month for an extra 25GB, with tiers that rise to 16TB for $799.99 a month. Google Drive's additional quotas are shared with Google's Picasa's photo storage service, and also give you an extra 25GB of Google Mail space.

Google is doing something interesting with Google Drive, something that's very different from its competitors, something that means its unlikely to be another Wave. By basing its new service on Google Docs, it's produced an application that's not really the sync tool it seems to be — although there's no reason why you can't use it as such (and we expect most users to treat it like one).

Instead, Google has created a new on-ramp for Google Docs and for applications built to use the company's cloud services. As soon as you do more than view a document online it's converted to Google Docs format, and becomes a link in your sync folder rather than a file. The result is a tool that makes it easy to get data into Google's cloud and hard for it to leave — something that's not what we expect from a cloud sync service. It's a big difference, and one you should take into account before you upload your files.