Google is bringing its Chromebook to Indian schools as part of a global scheme to introduce and increase adoption of the laptops in the education sector. 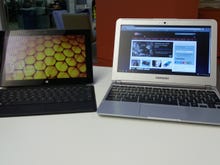 The U.S. IT vendor will kick off the programme next month across four schools in the southeastern state of Andhra Pradesh, initially making 25 Chromebooks available for free to each school, according to a report in The Economic Times. Teachers and instructors also will be trained to use the necessary software running on the laptops.

The pilot will be run in collaboration with Andhra Pradesh's department of IT and will benefit students in grades 9 to 10, said a senior government official, who added that discussions were ongoing to expand the programme statewide.

He said the state's IT department will provide the schools with Wi-Fi connection of 1Mbps as well as power backups. Mentors will be assigned to each school to train the teachers and instructors including how to use Google's online learning tools, Google Apps Training Center.

Ponnala Lakshmaiah, the state's minister for IT, said in the report: "The school instructors will teach core subjects using applications and software. We believe with interactive learning, the student will understand better and will take interest in the subjects."

Google already runs the scheme in about 3,000 schools across the United States, Singapore, and Malaysia, noted The Economic Times, citing a Google executive with details of the programme but who requested anonymity because Google had yet to announce the plan.

"Google aims to increase access to information and knowledge for all students, and encourages tools that support effective teaching and learning in the classroom, but we have nothing to announce at this time," a company spokesperson said in the report.