Google Fiber, the group rolling out an ultrafast 1Gbps fiber network in the US, may be forced to downsize due to internal disappointment with the service's progress. 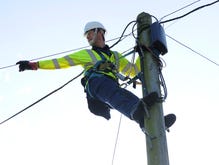 G.fast may 'sound like an indigestion medicine' but it could soon give your old copper-based connection a fibre-like makeover.

Alphabet CEO Larry Page is not happy with the speed of Google Fiber's rollout and last month told the unit's chief Craig Barratt to halve the unit's headcount to 500 and cut costs, sources told The Information.

The Fiber broadband team has challenged incumbent network operators since launching in Kansas City in 2010, and has since rolled-out its network to several metropolitan areas, most recently Salt Lake City.

But digging up streets and dealing with local municipalities to lay fiber is expensive in urban areas and out of the question for remote regions. According to Recode, it cost $1bn to lay fiber in Kansas. Yet for all the costs sunk into Google Fiber, the service only had around 200,000 subscribers by the end of 2014, according to The Information, a figure that is well short of the five million hoped for within five years.

Last month Google filed an application with the Federal Communications Commission (FCC) to test wireless broadband in 24 locations across the US using the 3.5Ghz band. News of its application followed reports that Google had halted the Fiber rollout in some cities.

In June it also acquired WebPass, a small ISP that delivers high-speed wireless broadband to residential buildings and businesses. The technology it acquired could help Google expand its services in metropolitan areas.

Following the creation of Alphabet last year, Fiber was carved out of Google and made a key part of Alphabet's Other Bets group, which was formed to give investors a clearer picture of how much these risky projects cost. Other projects in this group include X, the organisation behind Project Loon and Google's autonomous vehicles, Nest, and GV. Other Bets made a $1.6bn loss in the first half of 2016, roughly in line with its $3.6bn loss in 2015.

Alphabet may also be looking to Project Loon for profitability, with the company recently hiring Tom Moore, co-founder of satellite broadband service WildBlue Communications. Bloomberg reported this week that Moore starts as vice president of X and will become general manager of Project Loon in mid-September.

Astro Teller, the head of X, said that Moore will help it launch into the "commercial stage", following a number of trials in partnership with local mobile carriers, such as Vodafone in New Zealand and Telstra in Australia.