Google Street View is now a much smoother experience on mobile and the desktop thanks to a new rendering engine for Maps.

The new renderer should translate to a noticeably smoother experience when exploring the world through Street View, whether you're panning, navigating forward, or looking up at buildings. 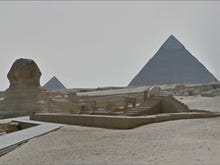 Behind the scenes of how Google brought Street View to the Pyramids Google is turning to locals to help build out Street View imagery as it takes its mapping services to pastures new.

The update, which is rolling out today, should eliminate the jumping effect when moving between locations, wonky buildings, and stuttering animations in Street View. It also brings significant improvements to Street View on mobile browsers, including motion tracking, touch support, and more realistic streetscapes.

The improvements to Street View on the desktop also include enhanced navigation controls. Now, an X appears at the cursor, in addition to the existing directional arrows, to mark the next landing spot when moving forward. On vertical surfaces, such as buildings or trees, Google employs wall rectangles to mark where the camera will point towards.

The new renderer enables smoother transitions when moving between two points on a streetscape, which should give the feeling of gliding rather than hopping. It also addresses the stuttering effect that can occur when rotating an image, by using lower resolution imagery when loading new content.

It's also enabled better object modelling in Street View, which should be noticeable when looking at buildings from certain perspectives. With the old renderer, the edges of some buildings may have appeared wrinkled or lopsided. The new renderer fixes these glitches by building a 360-degree model that considers all possible perspectives, according to Google.

Some of the main improvements on mobile are due to the new renderer using Web Graphics Library (WebGL) for graphics rendering in the browser. So, instead of seeing curvy fish-eye projections of images on mobile, Google is using WebGL to present a rendered sphere in a more realistic fashion.

Touch-based gestures are also now supported on mobile web browsers, bringing capabilities that have been available in the Maps app on Android, such as pinch-to-zoom and double-tap-to-go. Previously, zooming required pressing + or - buttons, while movement was controlled by clicking arrows on the ground.

Finally, the new motion tracking feature will allow users on mobile devices to change their point of view on Street View by moving their device. Developers can also use this feature in their apps.

Google has rolled out the new renderer in the Google Maps JavaScript API, which developers can use to improve their own apps.