A software glitch in Google firm Nest's smart thermostats is causing havoc in households, leaving some owners hot under the collar with cold homes.

Nest thermostats are meant to be a smarter way to control temperatures, capable of sensing a person's presence and learning just how cool or warm owners like their homes.

But as numerous owners have attested on Nest's user forums over the past week, battery drain issues that appeared after a recent software update have played havoc with cooling and heating systems.

The problem surfaced just as temperatures dropped to below freezing across large parts of the northern hemisphere. 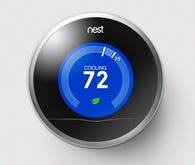 Google's $3.2 billion acquisition of Nest may look like a steal if Tony Fadell sticks around, the company learns better hardware design, and it nails the Internet of Things.

"Woke up to a dead Nest and a very cold house. Not good when you have a baby sleeping," one user reported.

While the outage doesn't appear to have caused any serious harm to users, it does illustrate the reality of one potential risk of embedding more smart devices into daily living. Another much talked about risk is remote hackers gaining access to private information or control of a device.

Numerous people have reported problems with the thermostat's battery, rendering the device's motion-sensors unresponsive and with incorrect temperature settings.

"My furnace kicked on at about 5am. When I woke up, the house was already at evening temperature. The thermostat did not turn on when I approached it, I had to rotate the ring. When I did, I could see it was at a temp that is typically set at 5pm," another user reported.

Nest has since acknowledged the problem, pointing to software version 5.1.3 that may cause devices to become unresponsive or incapable of operating efficiently, in turn causing the device to shut down.

The company has advised users to recharge and restart the device to get it working again as well as provided a nine-step guide to reactivate the device.

Nest co-founder Matt Rogers told the New York Times the Nest glitch was introduced in December but lay dormant for two weeks, at which point "things started to heat up" -- probably referring to Nest's support centre rather than users' homes.

Nest says the issue had been fixed for 99.5 percent of its customers, although on Wednesday a support forum moderator said Nest is still looking into the issue and was planning to provide an update when it had more information.

While plenty of users have expressed outrage on Nest's forums, some have been more understanding. One user forgave Nest's "pretty bad customer service" because it's owned by Google. "What do you expect? They're part of Google, the company that ate the Earth."

As the NYT pointed out, Nest owners can forget about suing the company: its 8,000-word service agreement only allows customers to engage it in arbitration.

However, the risks borne by users is having a chilling effect on IoT device sales. A recent survey by consultancy firm Accenture found nearly half of consumers don't trust the security of IoT devices and 18 percent refused to use one until manufacturers could offer better safety guarantees.

In the meantime, Nest users burned by this experience do have another option: reverting to a mechanical thermostat, which costs a fraction of its smarter offspring.