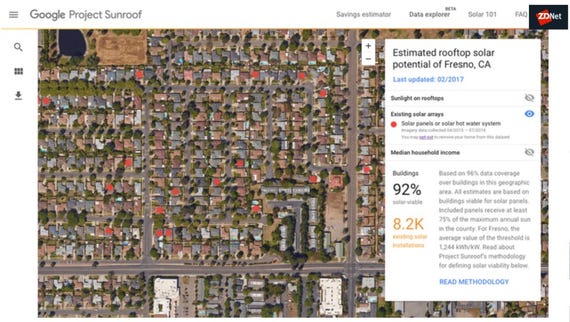 Google has released a new tool on its Project Sunroof website that pinpoints which of your neighbors has already installed rooftop solar panels.

The beta feature, called Data Explorer, may help sway households that are on the cusp of going solar but for whatever reason haven't.

Project Sunroof already provides an estimate for how much households can save by going solar. It also offers an estimate of a house's solar potential by calculating how much sunlight hits portions of each rooftop during a year. As of March, it offers this data on 60 million buildings in the US to help people calculate whether it makes financial sense to go solar.

Data Explorer adds social pressure to the equation by displaying a red dot on individual houses that have installed rooftop solar panels or solar-powered water heating. Zooming out a little will display an estimate of how many solar arrays are installed on a given block.

As Carl Elkin, a senior software engineer for Project Sunroof, explains, he decided to go solar after driving around his neighborhood and discovering that many of the adjoining properties had already made the shift to cleaner energy.

Instead of driving around looking for these installations, the information will be available in an easily searchable map.

The map plays to the "neighbor effect" identified by studies that have found that if you install solar panels it greatly increases the chance that your neighbors will follow suit. The neighbor effect was stronger than the relationship between income and adoption.

Google has identified 700,000 installations so far, which should rise as it refines its algorithms.