Google's general counsel said the search giant has done a "pretty good job" in addressing the European Commission's concerns over alleged anticompetitive practices in the region.

However, the EU's Competition Commission will likely demand further concessions from the company in order to appease its worry that Google is taking advantage of its dominant position in the search market. 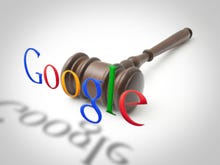 The search giant aims to settle an antitrust case with EU officials, but rivals are reportedly unhappy at the concessions already on offer.

Google's senior vice president and general counsel Kent Walker said in the blog post on Monday that it has been "discussing [its search] innovations with the European Commission as they have reviewed our search and advertising business." (Walker did omit the fact that nobody has a voluntary "discussion" with the European Commission over potential antitrust concerns.)

He noted that Google submitted proposals to address each of the four points highlighted by the Commission "in a constructive way," adding that they are "are meaningful and comprehensive, providing additional choice and information while also leaving room for future innovation."

"That’s why we focused on addressing the Commission" specific concerns, and we think we did a pretty good job," he said.

But it comes just less than a month after EU Competition Commission Joaquin Almunia said that the search giant "should improve [its] proposals," once it completes  analyzing the responses it receives from Google's rivals in the region.

Those rivals, such as ICOMP, a lobbying group and named complainant — which includes Microsoft and four other rivals as its members — aren't happy, indicating that Google may have to go back to the drawing board.

"The current package is clearly insufficient. It is really unlikely if the current proposal can be improved to such a point where it can be effective," said ICOMP's lawyer David Wood speaking to Reuters last month.

Whether or not Google thinks it did a "pretty good job" or not, it rests entirely on the Commission's shoulders to decide if the company will face a fine of up to 10 percent of its global annual turnover for infringing years. In total, that could amount to €2.9 billion ($3.8bn) based on the company's 2011 global revenue.

ZDNet put in questions to the European Commission's spokesperson outside of business hours in Brussels, but did not hear back at the time of writing.