Google will be investing around $200 million dollars in the Atlantic Wind Connection, according to a blog post yesterday, acquiring approximately 35% of the company. The AWC will provide a secure, underwater transmission backbone for power obtained at distant off-shore wind farms. 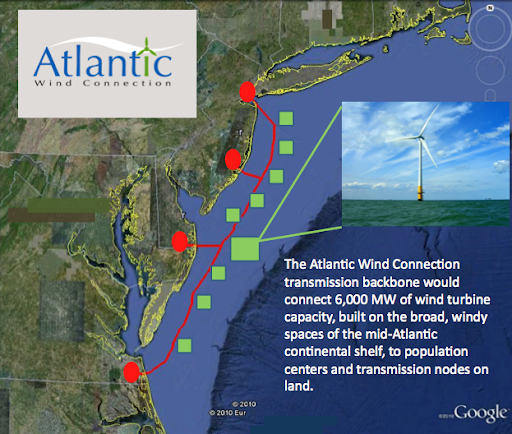 The transmission network will span 350 miles and will be able to connect to 6,000 megawatts of power from wind turbines, according to the statement.

Analysts (and Google) hope that this wind project will meet fewer hurdles than previous off-shore wind projects that have been stalled due to environmental and aesthetic concerns since most of the turbines will sit much farther off-shore than those in controversial projects like Cape Wind. Google explained in its blog,

The Mid-Atlantic region is ideally suited for offshore wind. It offers more than 60,000 MW of offshore wind potential in relatively shallow waters that extend miles out to sea. These shallow waters make it easier to install turbines 10-15 miles offshore, meaning wind projects can take advantage of stronger winds and are virtually out-of-sight from land.

We believe in investing in projects that make good business sense and further the development of renewable energy. We’re willing to take calculated risks on early stage ideas and projects that can have dramatic impacts while offering attractive returns. This willingness to be ahead of the industry and invest in large scale innovative projects is core to our success as a company.

The "attractive returns" would certainly suggest that diversification is in Google's future. We've seen them expanding beyond search into a variety of areas of telecommunications and looking to trading and investments in energy. However, their dealings in energy have generally been more about carbon neutrality and/or finding inexpensive and renewable sources of energy for their massive datacenters.

It isn't hard to imagine Google's investment in AWC paying serious dividends long-term on priority access to clean energy on the east coast. Clearly, 5 years from now when the AWC is anticipated to actually begin bring projects on line, Google will have extraordinary power needs and will require datacenter growth in major population centers to ensure speed, redundancy, and security. This is where investments in the AWC will truly pay off, when a data center in Virginia or New York isn't susceptible to summer blackouts, an inefficient power grid, or environmental criticisms. If Google is hooked directly into a clean energy backbone because of its investments, then the company will be well-positioned on many levels.