Google's Chromebook for business: Interesting math, but your mileage will vary

What follows is a good faith effort to highlight some of the arithmetic needed to make a comparison between Google's Chromebook, a thin virtualized client and a PC deployment.
Written by Larry Dignan on May 11, 2011

Google's big pitch for enterprise adoption of its Chromebook revolves around labor savings, easy implementation and cloud-based processes, but your mileage---and the math to get there---will vary.

At Google's I/O conference Wednesday all the talk was about the Chromebook and the company's browser-based Chrome OS. I'd argue that the Chromebook will have a rough outing with consumers. Just based on the price tag of roughly $400 it's hard to see the Chromebook competing with a tablet.

The enterprise, however, may find the Chromebook more appealing. At a press conference, David Girouard, president of Google Enterprise, said that the launch of the Chromebook and Chrome OS will be as big as Google Apps. "It's a big day for us. Corporate computing has been broken for a long time," said Girouard, who was flanked by three customers that tested Chromebooks in pilots. Citrix's Gordon Payne, general manager of the desktop division, also highlighted an HTML5 version of its Receiver software to get Chromebook users to SAP and other enterprise apps.

Google's point is that desktop management has been a mess and it's costly. As a result, Google will handle desktop management, updates, warranties, security and support for $28 a month per user ($31 for 3G). "Our TCO (total cost of ownership) is less than half of what people do now," said Rajen Sheth, group product manager Chrome for Business. 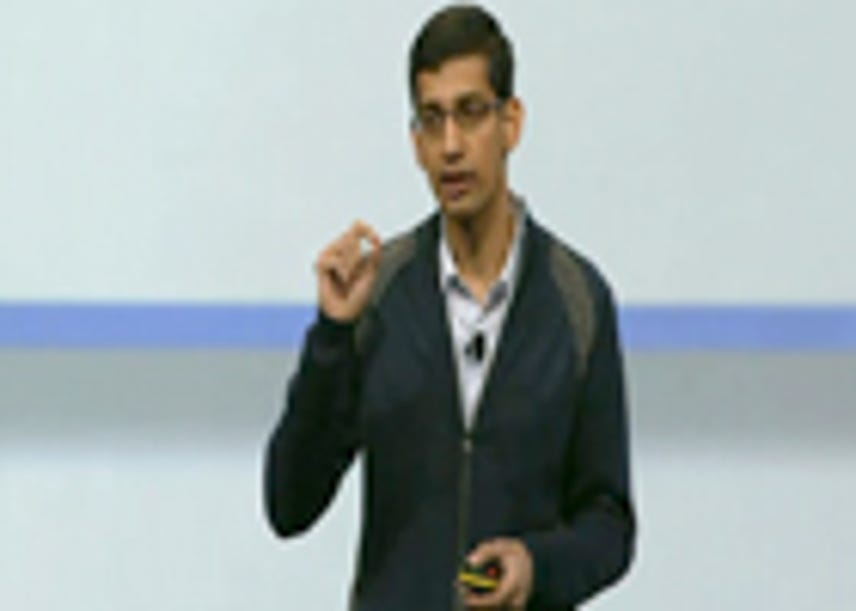 These heady comments spurred a few questions. How does Google Chromebook compare to a thin client rollout? How about virtualized desktops? What about training costs?

Google argues that there are few training costs because of consumerization and the fact that everyone knows how to run a browser. I don't buy that. Google Apps requires training and so does living in the cloud. Meanwhile, Google's Chromebook will be very different for many employees.

So what's the math? I did some digging and found it a bit surprising that neither Forrester nor Gartner could cough up figures easily. The more I poked around the more I realized that no one quite knows what a PC roll-out costs. Some folks stretch out upgrade cycles to five years---Google assumes a three year cycle. No company upgrades all of its PCs at once, which also alters the equation.

Toss in depreciation and tax benefits and you go from zero to complicated in a hurry.

What follows is a good faith effort to highlight some of the arithmetic needed to make a comparison.

Google will charge you $28 per user each month. For a typical company of 1,000 users that works out to $336 a year per user. That's $336,000 a year. One potential catch is that you sign on for three years and if you choose not to go Chromebook in year 2 you still pay for that extra year. Another item is that you'll need Citrix to access enterprise apps. If you don't have Citrix you'll have to license it.

So what does a PC deployment cost you for 1,000 users?

Moka 5, a company that specializes virtualization, said the typical annual cost per user is $3,030, or $252 a month. That's more than $3 million a year for a company of 1,000 and includes amortized hardware, software and support. The $3,000 a year figure was toss around quite a bit on Wednesday. That figure derives from a Gartner report that Ed Bott picked apart last year.

Digging a little deeper it appears that that $3,000 figure per user a year includes indirect costs (lost productivity and other items that are largely intangible). This Gartner report from 2008 via Citrix shows total cost of ownership for a locked and well managed PC of $2,845 a year. However, "end user costs" are $1,123 of that total.

In a footnote, Gartner said "indirect costs, or end-user costs, are costs that do not appear in the IT budget." In other words, "end-user costs account for the lost productivity of users who are learning about their systems, or are doing IT-related tasks without relying on formal support channels."

Thin client and virtualized deployments lower these indirect costs because they take away user control. Google's Chromebook would do something similar. After looking into indirect costs, I'm going to exclude them because a) they're partially made up; and b) every user will have a different indirect cost so it's hard to generalize. In addition, indirect costs are the easiest to fudge to make a point.

Cut to the chase and a well-managed desktop deployment will have direct costs of $1,874 a user per year. A server based system---virtualized desktops and thin clients---comes in at $1,655 or so. No matter how you slice it Google would come in cheaper.

For our purposes, Dhar is probably the most representative use case.

Dhar liked the simplicity of the Chromebook and reckons that he will deploy a few of them. However, Logitech has virtualized desktops and plain old PC deployments too. Dhar won't go completely Google and will have a mixed PC shop.

Nevertheless, Dhar noted that not all employees will flock to the Chromebook. It's good for an option and can be economical, but Google will be seeing pilots and trials for the foreseeable future. The biggest challenge for Dhar will be the three-year upgrade cycle with Google. Different sets of employees have different upgrade cycles and some simply need more power than the Chromebook can provide.

One other nugget is that Logitech's PC deployment will be complex. Sure it can farm out Chromebook administration, but Logitech will have thin and fat deployments too. In other words, one size of PC won't fit all.

And one last final note---for now at least. I pinged the Enterprise Irregular list and the reaction to the TCO case was mixed. A sampling:

If the tool is ineffective for the job, why even worry about the ROI or a comparison to some other tool that works better? Else, we would be looking at OLOC (one laptop, one child) as viable, cheap solutions for the enterprise.

Translation: Chromebook's good enough may not cut it for users.

If Google had done this prior to iPad intro it may have had a bigger impact because many CIOs are now looking to let employees use their own make of device, rather than stay stuck in 3-year laptop treadmill.

That last reaction shouldn't be underestimated. On the consumer front, the Chromebook will be competing with tablets, which could be a much more fun thin client that's already armed with Citrix and other enterprise tools.