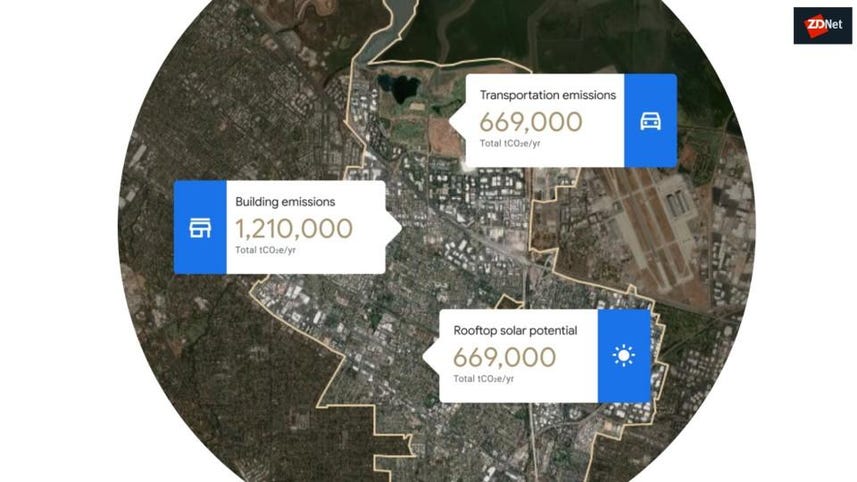 Better urban planning requires access to information, such as transportation and building emissions, air quality, or rooftop solar potential. Now, Google claims its new online tool will provide some cities with exactly that – and for free.

The tool, called the environmental insights explorer (EIE), launches in Europe today, following a beta test that started last year in five pilot cities across the US, Canada, Australia and Argentina.

It is now available in Dublin, Birmingham and greater Manchester. Developed as one of the company's sustainability initiatives, it lets users browse selected cities to find out about their current carbon footprint.

Although anyone can have a go, the tool is designed primarily for city planners; the idea being that it is only once they are reliably informed that they can start taking efficient action.

Google even predicts climate over the 20 next years, showing temperature and precipitation projections. Spoiler alert: the hot day increase for Dublin is expected to be of zero days.

Google Earth director Rebecca Moore said: "In Dublin, city leaders have already been testing the tool, and are using EIE insights to inform smart transit programs with the goal of reducing emissions and increasing the use of cleaner modes of travel."

Using location data from Google Maps, the EIE can identify a building's size and whether it is a home or an office, and aggregate that to local grids to estimate its energy consumption. Similarly, it can look at traffic, modes of travel and distances driven – then, based on vehicle mix and fuel type, establish data for transportation emissions.

It can even analyse satellite images to determine which roofs are well suited for solar power. And a note on the page suggests that it is working to assess whether it could produce useful data for the waste sector.

"This version is setting the baseline, but what will be of even more interest is when we start being able to compare data year on year."

Google also announced that it is making available local air quality data, starting with Copenhagen. This is part of its ongoing Project Air View, which equips Google Street View vehicles with scientific instruments to measure air quality at the street's level.

Project Air View started last year with a partnership with the City of Copenhagen, and the data which from now on is available to the public, was initially shared only with scientists and the City Council.

Until then, there were only three fixed stations monitoring air quality in Copenhagen, and which are still used now – partly to verify that the data gathered by Google is coherent.

SEE: These 10 technologies are most likely to help save planet Earth

Rasmus Reeh, senior consultant at the City of Copenhagen's Solutions Lab, told ZDNet: "Having a mobile monitoring station means that we now have data from every street and corner in the city. We can identify hot spots we couldn't see before, and we can measure things like ultra-fine particles and black carbon."

With this detailed typology of urban air quality, it is easier to identify and curb the sources of pollution, he said, and to protect citizens exposed to dangerous zones that had not been tracked before.

The EIE Labs, which is how Google is naming its new climate-focused datasets, is part of the company's efforts to drive sustainable initiatives – and to stay ahead of the game as technology companies increasingly compete to be seen as the greenest of them all.

While Microsoft announced the target of reaching 60% renewable energy consumption in its data centres by 2020, Apple said it is now powered by 100% renewable energy worldwide. HP has pledged to make every page printed carbon neutral, and Dell's already exceeded its 2020 target of using 50 million pounds of recycled materials in its products.

"It's a hot topic," said Cudden. "All global companies have social responsibility programs, so it's a really good move from Google."

Security
Are online degrees respected? (And how should you choose one?)

Education
If a scratch or two doesn't bother you, these Apple iPad deals are not to be missed