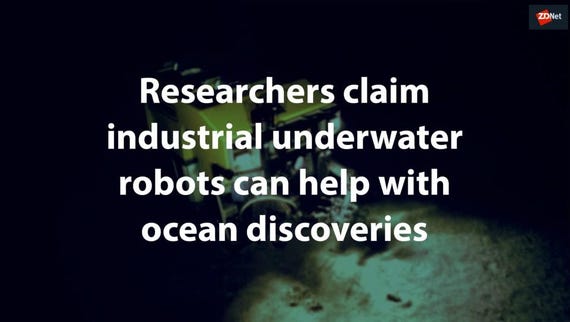 Nearly half a century ago, the US Department of Defense started working on a project to pinpoint locations on the surface of the planet thanks to satellites. What is now known as GPS has since come a long way, permeating every aspect of our everyday lives, from helping city-dwellers find their way through unknown streets all the way to assisting the delivery of emergency services.

And yet even today's most sophisticated GPS systems are still unable to map a huge chunk of the Earth: that which is located under oceans, seas, or rivers. The technology, in effect, doesn't mix well with water, which breaks down the radio waves GPS relies on to function.

MIT scientists have been looking at ways to create a new type of underwater GPS, which could be used to better understand the mysteries that lie between surface and seabed. The researchers have now unveiled a device called an underwater backscatter localization (UBL) that reacts to acoustic signals to provide positioning information, even when it is stuck in oceanic depths. All of this, without even using a battery.

Underwater devices already exist, for example to be fitted on whales as trackers, but they typically act as sound emitters. The acoustic signals produced are intercepted by a receiver that in turn can figure out the origin of the sound. Such devices require batteries to function, which means that they need to be replaced regularly – and when it is a migrating whale wearing the tracker, that is no simple task.

On the other hand, the UBL system developed by MIT's team reflects signals, rather than emits them. The technology builds on so-called piezoelectric materials, which produce a small electrical charge in response to vibrations. This electrical charge can be used by the device to reflect the vibration back to the direction from which it came.

In the researchers' system, therefore, a transmitter sends sound waves through water towards a piezoelectric sensor. The acoustic signals, when they hit the device, trigger the material to store an electrical charge, which is then used to reflect a wave back to a receiver. Based on how long it takes for the sound wave to reflect off the sensor and return, the receiver can calculate the distance to the UBL.

"In contrast to traditional underwater acoustic communication systems, which require each sensor to generate its own signals, backscatter nodes communicate by simply reflecting acoustic signals in the environment," said the researchers. "These nodes can also power up by harvesting energy from acoustic signals. Thus (...) UBL would enable us to build a long-lasting, scalable, battery-free underwater GPS."

At least, that's the theory. In practice, piezoelectric materials are no easy component to work with: for example, the time it takes for a piezoelectric sensor to wake up and reflect a sound signal is random.

To solve this problem, the scientists developed a method called frequency hopping, which involves sending sound signals towards the UBL system across a range of frequencies. Because each frequency has a different wavelength, the reflected sound waves return at different phases. Using a mathematical theorem called an inverse Fourier transform, the researchers can use the phase patterns and timing data to reconstruct the distance to the tracking device with greater accuracy.

Frequency hopping showed some promising results in deep-sea environments, but shallow waters proved even more problematic. Because of the short distance between surface and seabed, sound signals uncontrollably bounce back and forth in lower depths, as if in an echo chamber, before they reach the receiver – potentially messing with other reflected sound waves in the process.

One solution consisted of turning down the rate at which acoustic signals were produced by the transmitter, to allow the echoes of each reflected sound wave to die down before interfering with the next one. Slower rates, however, might not be an option when it comes to tracking a moving UBL: it might be that, by the time the reflected signal reaches the receiver, the object has already moved, defeating the point of the technology entirely.

While the scientists acknowledged that addressing these challenges would require further research, a proof-of-concept for the technology has already been tested in shallow waters, and MIT's team said that the UBL system achieved centimeter-level accuracy.

It is clear that the technology could find myriad applications if it were ever to reach full-scale development. It is estimated that more than 80% of the ocean floor is currently unmapped, unobserved and unexplored; having a better understanding of underwater life could significantly benefit environmental research.

UBL systems could also help subsea robots work more precisely, track underwater vehicles and provide insights about the impact of climate change on the ocean. Oceans-worth of water are yet to be mapped, and piezoelectric materials might well be the solution.

Join Discussion for: GPS and water don't mix. So scientists have...