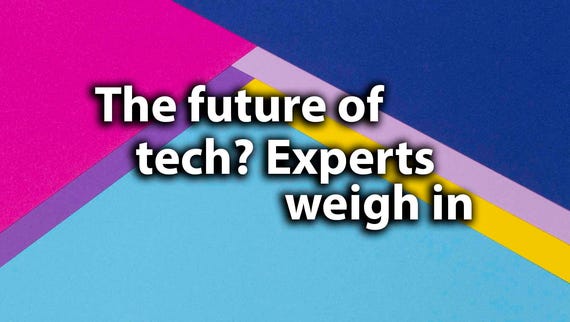 What do the next years have in store for tech? Here are experts' top guesses
Watch Now

An ongoing health crisis and a global recession: even for the most attuned of analysts, the past months have brought in a load of unexpected events that have made the coming years especially difficult to envision.

Yet research firm CCS Insights has taken up the challenge and delivered a set of 100 tech predictions for the years 2021 and beyond. The exercise is an annual one for the company, which last year anticipated, among many other things, that the next decade could see the rise of deep fake detection technology, or the adoption of domestic robots in some households.

One year later, and many of those predictions have been affected in one way or another by the COVID-19 pandemic. "What we've seen in the last few months has completely transformed a lot of the areas we cover," Angela Ashenden, principal analyst at CCS Insights, told ZDNet. "So, many of the predictions that we've put forward this year could only have been this year."

Underpinning many of the trends that the analytics firm identified for the next few years is, unsurprisingly, the radical transformation of work that the health crisis has brought about. CCS Insights anticipates that, in 2022, more than half of all office-based employees will still mainly be working from home, while a third of large firms by then will have cut their spending on office locations by an average of 20%.

There have been plenty of reports delivering similar verdicts since the global work-from-home experiment started in March. The latest statistics from the UK's Institute of Directors, for instance, show that almost three-quarters (74%) of company directors said they would keep increased remote working even after the crisis subsides, while more than half reported that they intend to reduce the use of workplaces.

An often repeated tag line is that "the future of work is already here". From that observation, explained Ashenden, many other trends emerge. "The hook for all of us this year has been the acceleration of digital transformation," she said. "The prediction we start with throughout is about remote working. That's the driver for a lot of other predictions."

For example, CCS Insights anticipates a wave of products that will improve the so-called "home-working last mile". This is because, while sophisticated remote collaboration tools have existed for a long time, the imperative to invest in services such as connected whiteboard devices is now unavoidable. The use of Google's Jamboard, Microsoft's Surface Hub and Samsung's Flip is, therefore, expected to surge through 2021.

The pandemic has also renewed some interest in the extended reality sector, with over half of medium and large businesses expected to adopt extended reality devices by 2025, pushed by the launch of better hardware by Apple and Facebook.

According to Ashenden, the need to support creativity and innovation is urgent for businesses in the current context. As a result, the tools that enable collaboration are getting a huge boost – and not a short-term one.

"Those areas will become much more central going forward," she said. "A lot of work processes that once relied on face-to-face have gone digital now, and that won't go back. Even when people are back in the office – once these things live in a digital world, that's where they live."

Connectivity, according to CCS Insights, will also change as a result of the switch to remote work. From next year, the firm expects network operators to offer dedicated work-from-home packages to businesses, differentiating between corporate and personal use, so that employers can provide staff with appropriate services such as security, collaboration tools and IT support. Operators will also increase their focus on connectivity in suburban zones, rather than city centers, as the workforce becomes increasingly established outside of the office.

And as connectivity becomes ever-more important, the research firm predicts that the next three years will be rocked by governments' actions to better protect their national telecom infrastructure. Think banning foreign ownership of network infrastructure, but also requiring operators to screen employees to weed out potential undercover believers in 5G conspiracy theories.

Of course, not all sectors of technology will benefit from pandemic-induced growth. As companies, in the near future, focus on recovering from the recession, explained Ashenden, some investments will be prioritized over others. Cloud migration and digitization, for example, are likely to push back large-scale Internet of Things (IoT) projects and AI deployment.

In fact, CCS Insights predicts that there will be no material uptake of 5G in industrial IoT outside of China before 2026, as companies show more concern for rebuilding revenue and profit.

Overall, however, the firm's prognostic seems positive. While CCS's analysts don't expect countries to go back to the level of prosperity they enjoyed before the crisis until late 2021, and possibly 2022, they are confident that the technology sector will recover faster than the overall economy.

In the short-term, this will be the result of huge strides in businesses' digital transformation: for example, half of large firms are expected to have more than 50% of their applications in the public cloud by 2023, as a result of the mass migration sparked by the pandemic.

On a longer timescale, Ashenden said, there is also great potential for younger generations to bring large-scale disruption to the tech industry. By 2023, CCS Insights predicts, startups led by under-30s will be challenging today's market leaders in remote collaboration.

A new survey recently found that three-quarters of school teachers in the UK believe that online and digital-learning platforms are, and will be, critical to primary and secondary education. In other words, generation Z's entrepreneurs-to-be are effectively following online classes using the same tools as employees – a unique turn of events in the field of collaboration services, which historically have been purely business-focused.

"The tools we're using to get work done, whether that is study or business, are the same," said Ashenden. "There are still lots of gaps and issues in those tools, but now kids in schools and colleges are seeing that as digital natives."

"There's real potential here for major disruption," she continued. "What could they come up with to support people that completely shakes up what we have today? I see potentially the same sort of innovation as when Facebook came in and completely changed the world."

Despite the overwhelming influence of the COVID-19 pandemic on this year's predictions, CCS's analysts came up with some more unexpected predictions, such as that Nokia could be acquired and that a film shot using a videogame engine could win an Academy Award for Best Picture by 2025.

Environmental issues were also at the heart of a few predictions: 2022 could see Apple roll out a carbon-tracking feature, while 3D-printed food could become a source of environmentally friendly meals by 2030. CCS Insights also anticipates that employee activism will oust the CEO of a Fortune 100 tech company by 2021.

You can find a list of the top 10 predictions from CCS Insights' analysts below:

Join Discussion for: 10 tech predictions that could mean huge...