Ride-sharing operator plans to introduce new services and expand its transport, food, and payments ecosystems in the Vietnamese market, where it has been since 2014.
Written by Eileen Yu, Contributor on Aug. 27, 2019 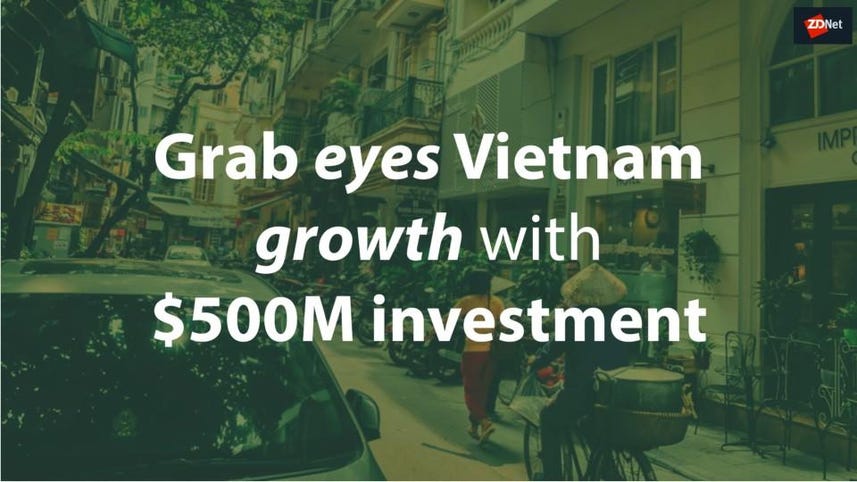 Grab is looking to grow its footprint in Vietnam with a planned $500 million investment, which will go towards the introduction of new services and expansion of existing ones such as transport and payments. To span over five years, the funds injection will help the ride-sharing operator tap opportunities in fintech, logistics, and mobility.

Specifically, Grab said it would align its growth strategy with the country's Socio-Economic Development Plan, which aimed to drive economic restructuring fuelled by innovation and improvements in productivity, efficiencies, and competitiveness. The development plan outlined the government's economic, social, and environmental goals for 2020 and beyond.

Grab offers ride-sharing and food delivery services in Vietnam, where it has had a presence since 2014 as well as a partnership with local digital payments vendor, Moca. The collaboration helped push Moca's payments volume on Grab's mobile app up by 150% in the first half of 2019, with monthly mobile active users increasing more than 70%, said Grab in a statement Wednesday.

Its food delivery service also clocked a 400% climb in gross merchandise value in the first half of the year, ringing in 300,000 orders a day on average. It added that, to date, its network of driver-partners collectively had chalked up earnings of almost $1 billion and merchants on its food delivery service saw revenue growths of 300% within three months of joining the platform.

Grab said its $500 million investment would support the launch of new services in Vietnam and expand the operator's transport, food, and payments networks.

Its head of regional operations Russell Cohen noted that the developing Vietnamese economy and young, mobile-first population would fuel the adoption of local digital services.

Grab's Vietnam country head Jerry Lim revealed that the company already would have poured in an investment of more than $200 million in the country by the end of 2019. Adding that it was one of Vietnam's largest technology investors, Lim said: "Today's investment of $500 million will accelerate our efforts to elevate the quality of life for millions of Vietnamese people beyond the end-users of our super app ecosystem. By aligning our business with the government's socio-economic development plan, we want to make a significant and meaningful contribution to Vietnam's long-term socio-economic growth, and support the country's Industry 4.0 ambitions."

In addition to growing its service offerings and footprint in the Vietnamese market, Grab also unveiled its Tech For Good development roadmap that aims to alleviate poverty levels, boost the skillsets of the local workforce, and create an environmentally sustainable future.

In particular, the ride-sharing company said it was targeting to extend access to the digital economy to 63 cities and provinces across the country, enabling Vietnamese to become micro-entrepreneurs on its network by signing up as drivers, delivery drivers, and merchants.

Grab said it hoped to partner financial institutions to offering small businesses and micro-entrepreneurs access to credit and insurance services.

It also aimed to drive its local hires in research and development (R&D), as part of efforts to help push the Vietnamese government's target of nurturing 1 million workers skilled in digital technologies by 2020. In addition, through its GrabVentures scheme, the company hoped to fuel the local tech startup ecosystem alongside the government's goal of creating 10 technology unicorns by 2030.

Grab last month said it was investing $2 billion in Indonesia where it would look to develop the local digital infrastructure, including an electric vehicle transport network, and introduce "affordable" e-healthcare services. Spanning five years, the investment also would see the ride-sharing company open a second headquarters in the Asian market.

In addition, it would jointly develop, alongside SoftBank, a transport network based on electric vehicles as well as geomapping tools for the Indonesian market.

Funded by SoftBank, the US$2 billion investment plans will see Grab develop an electric vehicle transport network and geomapping services as well as introduce "affordable" e-healthcare services to increase access to medical assistance in the country.