As part of its efforts to create an "everyday super app", Grab is increasingly tapping customer data so it can better predict consumer demands and offer services that are "hyper-personal". This means the app will be able to push services and content that are dependent on the consumer's location, preferences, and behavioural patterns.

Launched in 2012 as GrabTaxi, the Singapore-headquartered company began its operations as a ride-sharing operator before rebranding to Grab in January 2016, as it added more services to its portfolio. It introduced GrabPlatform in July 2018, offering a suite of APIs (application programming interfaces) to enable third-party providers to integrate their services with its app and further expand its services

Today, besides transport, Grab also offers food, parcel, and grocery delivery services as well as in-app mobile payment and micro-lending services. Following the introduction of its grocery delivery service GrabFresh last year, it unveiled plans to expand its offerings to include hotel bookings and online healthcare services through partnerships with Amsterdam-headquartered Booking.com and China's Ping An Good Doctor. These are slated to go live later this year. 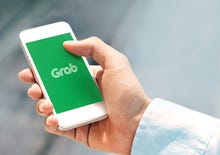 Grab snags more funds to push current round to $2B Ride-sharing operator raises another US$1 billion from a group of financial backers that include Vulcan Capital and Lightspeed Venture Partners, following a previous US$1 billion pledge from Toyota Motor.

To date, its app has clocked more than 138 million downloads and operates in 336 cities across eight Southeast Asian markets, including Thailand, Vietnam, Indonesia, and the Philippines.

Asked what gaps was it looking to plug with its aim to offer an "everyday app", Grab's head of product Jerald Singh told ZDNet the company hoped to address consumers' daily needs as well as create income opportunities for micro-entrepreneurs.

Adding that Grab would continue to beef up its core transport service, Singh said: "We offer our customers a range of transport options to support them from first- to last-mile in the way they want. Our ultimate aim is to be a one-stop mobility platform where users can pay through the Grab app, for a single journey that spans multiple modes of transportation."

The company has also invested in tools to help its partner micro-entrepreneurs and merchants drive their revenue, he said. Tools such as merchant-targeted dashboards provide technology and data to help these businesses analyse sales numbers and customer behaviour on GrabFood, for instance, which they then can use to grow their sales, he added.

The data insights also could be tapped to optimise their operations and identify new growth opportunities, such as tweaking their menus, he noted.

In addition, he said Grab is working with partners such as the National University of Singapore to use its data, alongside artificial intelligence, to solve key issues facing the Southeast Asia region such as traffic congestion.

With more data comes more context and focus on security

Singh said Grab was aiming to better tap the data it had to provide more context and relevance to individual users, so its app could make the right recommendations and highlight services meaningful to each consumer.

The app, last year, was updated with a homescreen containing "tiles", from which consumers could choose the service and content they wanted, including those from the company's external partners. These tiles provided shortcuts that allowed them to access the services they wanted in one tab, he said.

The app also featured a news feed section, where games and content such as food and restaurant reviews were curated from partners such as Yahoo and created internally. In addition, promotions from Grab partners were listed under the Daily Specials section.

According to Singh, the news feed took into account information such as the consumer's location as well as time of day to highlight content relevant to the user. For instance, it would pull up suggestions for lunch or dinner venues depending on the time, consumer's current location, and popularity of the dining options. Videos posted by food bloggers that featured popular restaurants also could be played directly in the app.

"We want to get to a point where [the app is] hyper-personal," he said. "As we add more services, widgets, games, and content, not everyone will be interested in or be engaged with the same set of things. We don't want to clutter [the homescreen] with things people don't need."

Singapore suffers 'most serious' data breach, affecting 1.5M healthcare patients including PM Government describes attack as "deliberate, targeted, well-planned" and assures no medical data has been tampered with, but security vendors warn compromised data may end up for sale on the Dark Web.

With the increasing value and variety of datasets it now collects, however, how is Grab ensuring the information is properly protected, especially amidst a growing rash of security breaches?

Singh said the company collected "only data that is necessary" to facilitate the delivery of services to its users.

"While we can't stop bad actors from trying to break in, we make sure we have all the tools, systems, and processes in place to prevent breaches from happening and detect them quickly if they occur," he said, noting that Grab staff, for instance, were trained to identify and report cyber risks.

Asked for his thoughts on Singapore's plan to include data portability in the PDPA, Singh urged the government to consider its costs and impact on businesses before finalising the policies.

Grab reported US$1 billion in revenue last year, where its financial business arm also secured money licenses in six Southeast Asian markets. It currently has seven research and development facilities across the region, including Singapore, Beijing, Jakarta, and Bangalore, and in Seattle, USA.

Last September, Grab and Uber were each fined more than S$6 million for impeding market competition in Singapore following their merger, including moves to increase rider fares and driver commissions. The Competition and Consumer Commission of Singapore said the financial penalties aimed to "deter completed, irreversible mergers that harm competition".

Ride-sharing operator adds grocery delivery to its offerings and introduces GrabPlatform to allow other providers to integrate their services with its app, as it aims to become an "everyday superapp".

Join Discussion for: Grab rides on data in bid to offer SEA consumers...