By Zack Whittaker for Between the Lines | June 4, 2014 | Topic: Enterprise Software 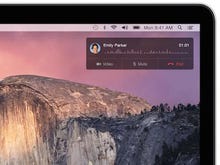 Unveiled for the first time on Monday at the company's Worldwide Developer Conference (WWDC) in San Francisco, California, Apple revealed a number of changes to its desktop platform  — many of which are aesthetic, while others are more functional.

Apple executive Craig Federighi, who heads up the company's software engineering helm, outlined some of the new features, including an improved Notification Center, user interface tweaks and translucency effects, and a redesigned dock.

In many ways, the user experience is now akin to its iOS counterpart, with much of the functionality brought into iOS 8 , and its immediate predecessor iOS 7, into the desktop version for Macs, MacBooks, and iMacs.

ZDNet explored some of the new features and functionality, and gave it a test-drive following the announcement.

While some of the features highlighted during the keynote are not yet available — with more expected to land in the coming weeks and months before its September-October launch date — we cherry-picked the best features and show you how they work.

The new user interface draws in many similarities from its iOS 7 and iOS 8 counterpart with the translucency and flat design. Although many of the icons remain layered and three-dimensional, these are expected to change in coming updates.

The dock has also been redesigned as flatter, keeping in line with the bottom dock of iOS 7 and iOS 8, which is square with no rounded corners, but keeps the magnification as with the previous version. Some of the icons have also been flattened, which isn't surprising considering Apple design chief Jony Ive has his hands in both the mobile and desktop pies.

The fonts in OS X 10.10 have changed, offering a wider, rounder font than previous iterations of the desktop operating system. On a Retina display, these fonts are extremely smooth and pleasant to view.

You can see from the translucent blending in the sidebar where the wallpaper begins to seep through. This is replicated across the entire operating system, including in other apps, such as Messages and Spotlight Search.

Get ready to see some changes in the Notification Center — it's bigger and better than it was before, and it's taken the best features from its mobile sibling.

Anybody remember Windows "Longhorn" before it came out? It seems Apple took that sidebar and made it bigger, better, and a lot prettier.

Now the Notification Center — still available from its quick-access button in the top-right of the display — includes stock information and a customizable stream of information, including the weather, a world clock, and a calculator. With the ability to add other widgets, it's expected that these will be opened up to third-party developers over time.

These widgets can be adjusted, and thrown in or thrown out as the user wishes — so the user isn't stuck with the same old widgets. It also includes the typical calendar functions and other at-a-glance information to keep you updated with what's going on in your life.

Some people don't like change, but some of the improvements in OS X 10.10 are for the better — especially if you use it constantly, or over long periods of time.

Spotlight Search now appears in the dead-center of the screen you're working on, which is particularly handy if you have very large displays or multiple screens. It overlays what you are working on, and can pick out everything from suggested websites, your locally stored apps and data, to system preferences, and other items from the App Store. It also offers a better preview of what you're looking at so you can easily determine what you want.

Even running third-party apps, such as Microsoft Outlook for Mac, you can filter through emails and other non-Apple app data. With text documents and images, you also see a preview of the file so you can be sure that's exactly what you're looking for.

The new Messages application has a new user interface and experience, exactly like the Finder app. You can now also send traditional text messages (SMS) through your iPhone and read them on your Messages app, keeping even non-data iMessages in sync with your Mac, so you're never out of the loop.

If you need to drop someone a quick call, you can do this from Messages via video-calling or audio-only. And if things get a little noisy? You can simply hold back any notifications from that conversation.

Apple is continuing to blend — though not merge or unify — some of the best features of iOS 7 and iOS 8 into the latest OS X 10.10 desktop operating system. Apple calls one of those features Continuity; it allows iPhones and iPads to talk better with Macs.

Also, if you are in an area where there is no wi-fi, your iPhone (running iOS 8) will become an instant personal hotspot and connect your Mac to the Web. And when you no longer need it, the connection will cut out so it saves on your data plan — as well as your iPhone battery.

The new Safari comes with a similar translucent new user interface, with many of the features packed in from OS X 10.9 "Mavericks." It also comes with an omnibar, which allows users to search and type in websites, as well as access your recently-most visited sites and other favorites and bookmarks.