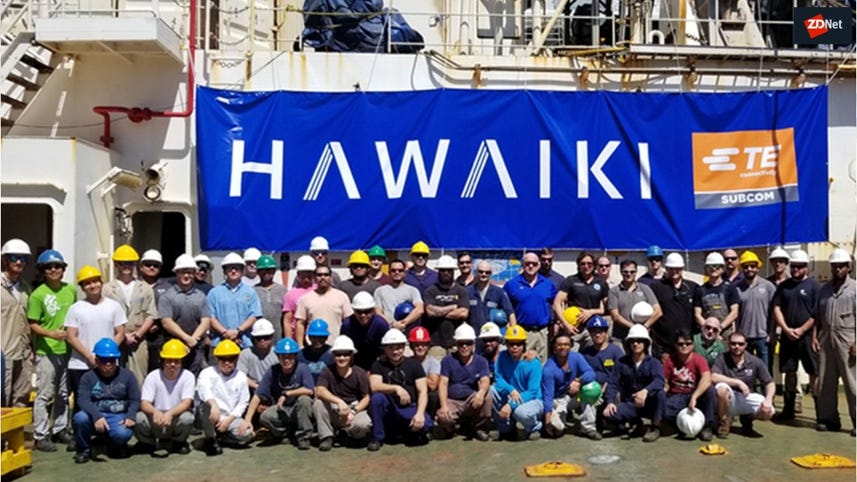 "Hawaiki is the fastest and largest cross-sectional capacity link between the US and Australia and New Zealand. It will significantly enhance our connectivity to the rest of the world and, ultimately, improve the everyday lives of our communities," CEO Remi Galasso said.

"In addition to greater levels of resiliency, the Hawaiki cable system brings greater competition to the New Zealand market, meaning we now have more choice and flexibility when it comes to designing connectivity solutions that meet the diverse needs of New Zealand consumers and businesses."

"We are already receiving and reviewing proposals from companies locally and from off-island for the establishment of business activities dependent on reliable, affordable, and high-speed internet connectivity," the governor said.

"We are also in a perfect position to propose state-of-the-art connectivity, including a direct link to the US West coast, to our neighbouring countries throughout the Pacific Islands region."

Hawaiki Submarine Cable LP had in April announced completing its final landing in American Samoa, with the United States territory to gain access to 200Gb of additional capacity from the cable.

Hawaiki had announced reaching the halfway point in its rollout across the Pacific Ocean in January, with the company being granted a US Federal Communications Commission (FCC) licence in December.

The US domestic segment between Oregon and Hawaii had been completed during the final quarter of 2017. Hawaiki then began laying the international portion of its subsea cable in November.

"The system includes some branching units as well for the islands -- American Samoa is already in, and we expect a few more coming in the next few months," Galasso told media at the time.

The cable has three fibre pairs: Two between Sydney and the US, and one from New Zealand to the US.

Two maintenance vessels, one based in Noumea and the other in Vancouver, are set to repair the system over the next 25 years, with the lifespan of the cable system guaranteed by TE SubCom.

Construction commenced on the Hawaiki subsea cable in April 2016, three years after first being announced. It has a design capacity of 43.8Tbps and makes use of TE SubCom's C100U+ Submarine Line Terminating Equipment (SLTE).

The cable is privately owned, having been co-developed by Sir Eion Edgar, a New Zealand businessman whose company provided "substantial" investment for the cable in July 2015, and Galasso. Also providing funding was Malcolm Dick, the co-founder of New Zealand's third-largest telco Slingshot.